Blindness Doesn’t Keep This Birmingham Golfer Off the Links 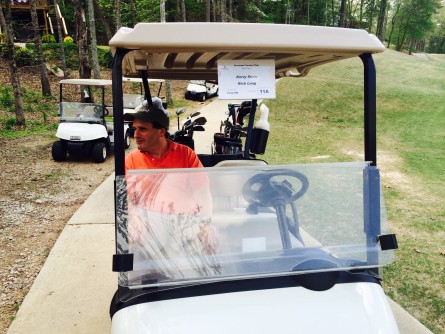 Newswise — BIRMINGHAM, Ala. – Growing up down the street from Charley Boswell, a World War II hero and golf champion who was blind, inspired Birmingham resident Kerry Stein, who was born without sight and participates annually in the University of Alabama at Birmingham School of Optometry golf tournament.

“It’s easier if you’ve had no sight since birth than if you lose it as an adult because you don’t know what you’re missing,” Stein said. “But when you grow up in a public school with all sighted people, you want to be just like them.”

“I felt like it was a game that I could learn,” Stein said. “I have had some great instructors over the years.”

For the third time, Stein competed alongside 62 other golfers in the UAB School of Optometry Dean’s Community Advisory Committee (DCAC) golf tournament to benefit scholarships, research and renovations for the school.

Stein was a member of this committee for many years.

“I was approached to be on the board by an optometrist who used to be at the school, and I felt like I would have some impact other sighted members would not have since I don’t have sight,” Stein said.

In the past decade, this annual tournament has raised enough money to endow a $100,000 research fund and three $25,000 scholarships. This year, the event brought in $17,000, and the money raised will be used for the school’s greatest needs.

“This fundraising event has a tradition of success over many years,” said Rod W. Nowakowski, O.D., Ph.D., dean of the School of Optometry. “We have many loyal participants who have enjoyed the camaraderie and the opportunity to help the school financially.”

Nowakowski says the funds raised have been vital to the school.

“Our research fund supports scientific and clinical investigations into disorders causing vision impairment and blindness,” Nowakowski said. “It is our hope and our dream that this research will eventually lead to new techniques for prevention and treatment.”

Knowing that this important work could one day help others who are blind keeps Stein involved with the School of Optometry.

“I feel like it’s a great school, and we need to continue to support it,” Stein said.