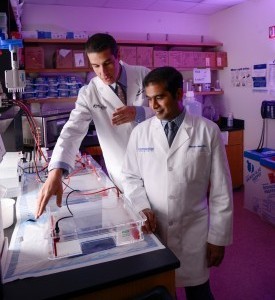 Newswise — DALLAS – Aug. 22, 2016 – Researchers at UT Southwestern Medical Center have identified a previously unknown role of a cellular signaling molecule involved in release of the “hunger hormone” ghrelin, a finding that could have implications for optimal treatment of children taking beta blockers.

The molecule, beta 1 adrenergic receptor, is a member of a class of cell surface receptor proteins whose primary functions are to convert extracellular stimuli into intracellular signals. In the study, published online today in The Journal of Clinical Investigation, researchers found that this receptor mediates release of ghrelin by cells in the stomach.

Ghrelin, known as the hunger hormone since the protein stimulates appetite and is produced before meals, also prevents dangerously low blood sugar levels, or hypoglycemia. The hormone acts as a natural antidepressant as well.

“When beta 1 adrenergic receptors are removed from the ghrelin-producing cells of laboratory mice, the animals exhibit a marked reduction in circulating ghrelin levels,” said study senior author Dr. Jeffrey Zigman, Associate Professor of Internal Medicine and Psychiatry at UT Southwestern. “The effects of this reduction become apparent when the mice are placed on a calorie-restricted diet and include severe hypoglycemia and, as a result, reduced survival.”

The involvement of beta 1 adrenergic receptors in this process may be particularly relevant to children prescribed beta blocker drugs to treat conditions such as irregular heart rhythms or infantile hemangioma, an abnormal collection of blood vessels that may cause “strawberry” marks on the skin.

Beta blockers work by binding to and inhibiting beta 1 adrenergic receptors. While these drugs usually are not associated with adult hypoglycemia, they have been linked to marked drops in blood sugar levels of young children taking them, especially during periods of acute illness or decreased food intake. These reports of hypoglycemia in children taking beta blockers led to development of best practice standards, with the goal of increasing awareness of and avoiding this life-threatening condition.

Motivated by these cases of hypoglycemia in children and by the findings of hypoglycemia in calorie-restricted mice lacking beta 1 adrenergic receptors in ghrelin-producing cells, Dr. Zigman’s team sought to answer the question: Is there a connection between hypoglycemia and the reduced ghrelin release caused by beta blocker treatment?

In its research, the team reproduced hypoglycemia in young laboratory mice treated with beta blockers and then fasted overnight, a result similar to that found in children prescribed these drugs. Furthermore, the team demonstrated low levels of ghrelin in the mice.

“Based on our data, we would predict that suppression of ghrelin release by beta blockers acting on ghrelin-producing cells likely is responsible for the hypoglycemia that children treated with beta blockers sometimes experience,” said Dr. Zigman, who holds the Diana and Richard C. Strauss Professorship in Biomedical Research and the Mr. and Mrs. Bruce G. Brookshire Professorship in Medicine. “For as yet unknown reasons, most adults taking beta blockers don’t exhibit problems with low blood sugar, and neither did our adult laboratory mice.”

Besides young children, Dr. Zigman said other groups that could be susceptible to hypoglycemia as a result of beta blocker-induced or other causes of reduced ghrelin production include those with muscle and fat wasting – cachexia – and people with anorexia nervosa.

The work was supported by grants from the National Institutes of Health and an International Research Alliance with Novo Nordisk Foundation Center for Basic Metabolic Research at the University of Copenhagen.

About UT Southwestern Medical Center
UT Southwestern, one of the premier academic medical centers in the nation, integrates pioneering biomedical research with exceptional clinical care and education. The institution’s faculty includes many distinguished members, including six who have been awarded Nobel Prizes since 1985. The faculty of almost 2,800 is responsible for groundbreaking medical advances and is committed to translating science-driven research quickly to new clinical treatments. UT Southwestern physicians provide medical care in about 80 specialties to more than 92,000 hospitalized patients and oversee approximately 2.2 million outpatient visits a year.