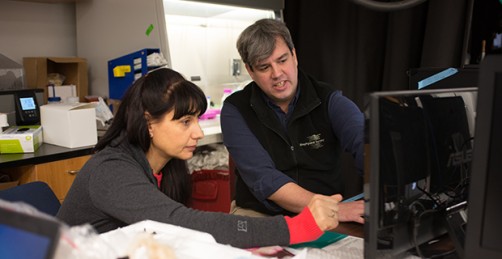 Newswise — It's rare for a faculty member in any physics department to earn a federal grant administered by the National Institutes of Health (NIH), but that is exactly what Boise State assistant professor and biophysicist Matt Ferguson has done.

On July 1, Ferguson was awarded a three-year, $410,000 NIH Academic Research Enhancement Award to study and help explain the basic functions of the human genome.

"This award will fund the main focus of my research, which is how to visualize the splicing and transcription of RNA, which is a fundamental process in biology," Ferguson said.

First, a basic biology lesson: All life forms, including human genes, consist of strands of DNA that pair together to form double helixes. Ribonucleic Acid (RNA) is made from DNA, and is used to create protein in the body out of amino acids – a vital function.

"The big question that I’m trying to answer with my research is, how does the genome work?" he explained. "About 15 years ago we finished sequencing the human genome, we know all the letters in the book of life, but we don’t yet know its grammar and syntax."

The human genome is simply the sum total of our DNA. Ferguson explained that when the human genome was sequenced, scientists expected to find more than 200,000 genes within, and all of those to code for protein. But in actuality, only 20,000 genes were discovered, with only 2 percent coded for proteins.

"That leaves us with the question: why do we have so few genes and what does the other 98 percent accomplish?" Ferguson said.

One explanation for both findings is that the average human gene has nine exons, otherwise known as a segment of a DNA or RNA molecule that codes for a protein, and eight introns, which are non-coding sequences. When you consider the factorial combinations, this amounts to roughly seven billion genes in our genome.

However, researchers still do not understand how that alternative splicing is regulated – in other words, how coding and non-coding RNA segments know how to link up.

This is where Ferguson's research comes into play. Ferguson has constructed a microscope that is unique in its temporal resolution and spatial resolution, which will allow him to test how scientists can understand the regulation of splicing. There are only three such microscopes like this in the world. The NIH grant will help fund the first three basic experiments that Ferguson can conduct, as well as fund a graduate student to aid his research.

Ferguson first developed the two-photon laser scanning fluorescence fluctuation microscope while working as a National Science Foundation (NSF) fellow in Montpellier, France. The unique microscope has a 3D orbital tracking feature that allows Ferguson to monitor the number of RNA molecules that are produced in an active site of transcription in a living human cell – in this case, a bone-cancer derived cell line harvested from a 15-year-old girl.

"These particular cells are flat, which allows me to see it better in the microscope," he said. "They’ve had three genes integrated into their genome that allow me to visualize RNA molecules as they’re synthesized from DNA and spliced and translated into protein."

His research could have broad impacts on how diseases are understood and treated. Biological processes are regulated through specific protein molecules called cofactors, or helper molecules, which, when mis-regulated, are susceptible to mutations and are correlated with human disease.

"Having this tool will allow us to learn not only how splicing is regulated, how it is mis-regulated and also how that might be treated at the molecular level. We’re hoping to first learn more about basic biology and then apply it to prevent or treat diseases in the long term," Ferguson said.

This is the first extramural NIH grant he has received during his career.

Research described was funded by grants from Research Corporation for Science Advancement and the Gordon and Betty Moore Foundation through Grant GBMF5263.10 and by National Institute of General Medical Sciences through Grant 1R15GM123446-01.  To read more about the Ferguson Lab please visit https://sites.google.com/boisestate.edu/ferguson/physical-biology-of-gene-expression.