Hear musician George Winston talk about his remarkable experience at City of Hope, where he battled and overcame thyroid cancer, basal cell carcinoma, and myelodysplastic syndrome. Known worldwide for his impressionistic, genre-defying music, George will meet his bone marrow donor for the first time on May 9, at City of Hope's annual Bone Marrow Transplant Reunion, officially called A Celebration of Life.

Kayla Saikaly, 17, and her mother, Samar, fought her aplastic anemia together. They will meet the donor of her lifesaving bone marrow at City of Hope on May 9. 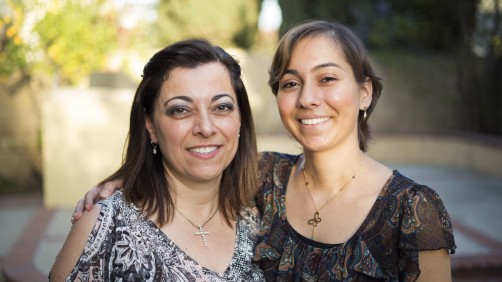 Newswise — DUARTE, Calif. — Bone marrow transplants offer a second chance for people with life-threatening blood cancers and other hematologic malignancies. But many recipients, though overwhelmed with curiosity and the need to express their gratitude, can only dream of meeting the strangers who saved their lives. City of Hope is about to make that dream come true for two patients.

At City of Hope’s annual Bone Marrow Transplantation Reunion on May 9, two grateful patients will meet the strangers, each hailing from different countries, who gave them back their futures.

“She’s a world away, and we’ve never met, but we’re – in a way – ‘genetic twins,’” said George Winston, the impressionistic, genre-defying musician with more than 20 instrumental albums under his belt. Winston received a lifesaving transplant from a young German woman two years ago, and can’t wait to get to know her. “It’s amazing how they can locate a donor. I can’t wait to meet her and just thank her from the bottom of my heart.”

The meetings are the public focal point of City of Hope’s annual Celebration of Life. Other meetings, and reunions, will take place throughout the event, attended by more than 6,500 bone marrow, stem cell and cord blood transplant recipients, their families and donors. All will celebrate second chances, scientific breakthroughs and transplant anniversaries.

Each survivor wears a button proudly proclaiming the years since his or her transplant. For some, it’s only a year. For others, a few decades. They celebrate their own recoveries, and the medical advances that have allowed this fellowship of survivors to grow from just a single patient 38 years ago at the first reunion, to thousands.

City of Hope helped pioneer bone marrow transplantation nearly four decades ago and is now a leader in bone marrow, stem cell and cord blood transplant, preparing to formally launch its Hematologic Cancers Institute. City of Hope has the only transplant program in the nation to achieve nine consecutive reporting years of “over performance” in one-year overall patient survival, according to the most recent data from the Center for International Blood and Marrow Transplant Research, which tracks all such transplants performed in the U.S.

“The reunion is a motivation that leaves us in awe of the many patients we’ve been able to help, but also humbled and focused on the patients currently in our care and those who will count on us in the future,” said Stephen J. Forman, M.D., Francis & Kathleen McNamara Distinguished Chair in Hematology and Hematopoietic Cell Transplantation. “We don’t have any results so good that they cannot be improved. We’re always focused on how we can do this better. We’re never satisfied.”

Two patients will be highlighted as part of the reunion, and will meet their donors for the first time ever.

Winston, who considers music his first language and English his second, will be learning at least one German phrase – danke schön – by the time he meets his donor, a German native. Already a thyroid and skin cancer survivor, in 2012 Winston developed myelodysplastic syndrome, a condition in which the bone marrow doesn’t produce enough healthy blood cells and frequently progresses to acute myeloid leukemia.

Kayla Saikaly, now 17, was diagnosed at age 13 with aplastic anemia, in which the bone marrow fails to produce enough blood cells, crippling the immune system. A nose bleed after a basketball game, some unexplained bruising and a battery of tests led to her diagnosis. A bone marrow donor was found for her in Israel. Saikaly spent the 40 days after her transplant at City of Hope while her new immune system engrafted into her body. She returned to her home in Cerritos a few days before her 16th birthday. Now 17, she coaches elementary school children in soccer, basketball and baseball. She wonders about her donor, who gave her this second chance. “Getting the bone marrow means everything in my life,” she said. “I wouldn’t be able to live my life and do what I do.”Saikaly and Winston will meet their donors during a ceremony at 10 a.m. May 9 at City of Home. That meeting will be followed by a program of entertainment for attending families. Among the highlights:• A chance to mingle with a special guest from the Los Angeles Dodgers.• Comedy from cancer survivor and A&E’s Modern Dads star Sean Kent, who will be celebrating 11 years as a cancer survivor.• Musical performance by George Winston.

And, in a first at City of Hope, a baton pass to support Stand Up to Cancer. The baton pass is a campaign to support Stand Up To Cancer’s cancer research efforts. For every pass of the baton, Seimens, which supplies the healthcare industry with imaging and diagnostic technology, will donate $1 to Stand Up to Cancer, up to $1 million. The baton will be passed to City of Hope staff, patients and be passed through the crowd of reunion participants as they convene for a massive group photo.

Caption: Hear musician George Winston talk about his remarkable experience at City of Hope, where he battled and overcame thyroid cancer, basal cell carcinoma, and myelodysplastic syndrome. Known worldwide for his impressionistic, genre-defying music, George will meet his bone marrow donor for the first time on May 9, at City of Hope's annual Bone Marrow Transplant Reunion, officially called A Celebration of Life.

Caption: Kayla Saikaly, 17, and her mother, Samar, fought her aplastic anemia together. They will meet the donor of her lifesaving bone marrow at City of Hope on May 9.