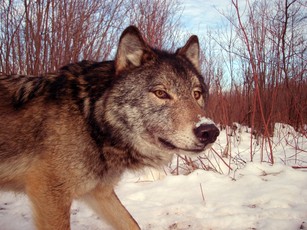 Michigan Tech scientists are studying the bones of wolves.

Newswise — To track atmospheric change caused by human activity, researchers have long studied a variety of materials, from tree rings to air trapped in glacial ice. A problem has been "noise"-- natural variability caused by sampling and random events that affect atmospheric chemistry. Noise can make it hard to tease out trends from the data.

Joseph Bump, a PhD candidate in forest science at Michigan Tech, and his colleagues speculated that those trends would be picked up by top predators as well as by trees. And they further suspected that measurements from predators would show much less noise.

"Wolves consume many prey animals—a minimum of 150"200 moose contribute to an Isle Royale wolf's diet over the course of its lifetime—and the prey consume a whole lot of plants," Bump explains. "Just by being who they are, wolves and other top predators increase the sample size, because they do the sampling for us."

The team studied moose and wolf bone samples dating back to 1958 from Isle Royale National Park, in Lake Superior, the site of the longest-running predator-prey study in the world. In addition, they looked at 30,000-year-old bones from the long-extinct dire wolf and prehistoric bison pulled from the La Brea tar pits in Los Angeles. They compared the trend found in the bone chronologies to trends already established for tree rings in North America.

They found that gray and dire wolves, provide a much clearer record of environmental change than either the plants, the moose or the bison.

"Since the widespread combustion of fossil fuels, we have put a human fingerprint on atmospheric carbon dioxide," Bump said. "That fingerprint shows up in trees, and it shows up in animals that eat trees, but it shows up with the least variation in the top predators."

That fingerprint has to do with the ratio between carbon-12 and carbon-13. While carbon-12 is always much more abundant in atmospheric carbon dioxide, burning fossil fuels releases even more of it. So in recent years, even more carbon-12 has been incorporated by organisms than carbon-13.

The scientists found that the carbon-12 signal improves the farther up the food chain you go. "It's noisy for trees, less noisy for moose, and even less noisy for wolves," Bump said.

"In a way, this whole study can be summed up by asking, 'How many trees does a wolf represent?'"

Their analysis opens the door to a new area of inquiry, since the bones of predators dating back dozens to thousands of years are available at natural history museums all over the world.

"Instrumental measurements of environmental variables are only available for about the past few hundred years, so this may help us understand paleo-environmental change better, and if we can understand ancient environments better, then our ability to predict future changes is improved," says Bump.

The study was funded by the National Science Foundation, the U.S. Environmental Protection Agency, the National Park

Proceedings of the Royal Society