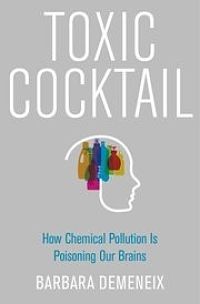 This important book explains how exposure to endocrine disrupting chemicals (EDCs) is resulting in reduced IQ levels in children and higher rates of Autism Spectrum Disorder (ASD). The author also explains the approaches needed to reduce exposure to today’s toxic cocktails. These include the engagement of scientists in influencing policy makers, taking action to protect ourselves and the next generation, and working with NGOs, such as HEAL.

This easy-to-read yet erudite book explains how environmental chemical exposure affects the thyroid hormone – one of the body’s most essential regulators of brain development.

“Toxic Cocktail How Chemical Pollution is Poisoning Our Brains” takes the reader from a café terrace in Paris, the city in which the author is a world expert in endocrine disruption and professor at the Museum of Natural History, to Plato’s Republic and Mark Twain in Switzerland.

The story begins with the discovery of iodine and its role in causing cretinism in the early 19th century. This sets the scene for explaining how certain endocrine disrupting chemicals (EDCs) can interfere with the capacity of our thyroid glands to capture iodine and to make thyroid hormone. When this takes place during the development of a child in the womb it can have devastating effects on cognitive functions.

The EDCs that interfere with the thyroid hormone are resulting in falling child IQ and contributing to rocketing rates of Autism Spectrum Disorder (ASD). Figures from the US show an almost four-fold increase in ASD from one in 250 children diagnosed with this condition in 2001 compared to one in 68 in 2014. Where data are available, this increase is mirrored by similar increases in other countries. The human genome did not change nor were the diagnostic criteria for autism altered over the period the data were collected.

The costs to human health from the major thyroid-disrupting chemicals (PCBs, mercury, PFCs, pesticides, phthalates, antimicrobials and ultraviolet filters) are likely to be enormous. Data is limited but what exists allows two brain drainers to be convicted of the crime - flame retardants (PBDEs) and pesticides (organophosphates). The data were used in a recent calculation of health costs from exposure to EDCs in the European Union. The estimate puts the costs of reduced IQ and neurodevelopmental problems from these two chemicals alone at around €150 billion every year.

Turning to the solutions for achieving change, the author recommends polycentric approaches “with individuals working together at community and national levels”. Prof Demeneix is convinced that these individuals must include the many scientists who consider that knowledge about EDCs is not being acted upon. She says that she and others like herself “have a responsibility to explain the knowledge we have gained in the last decade to regulators and politicians.”

At a personal level, the recommendations are convincing on what individuals can do for themselves. Small changes are shown to have significant effects on certain forms of chemical loads. For example, when children consume an organic diet, the chemical load in their urine falls. Exposure to several toxics in oily fish can be reduced by removing the skin. Avoiding canned soft drinks and food prepared outside the home removes the main factor in exposure to BPA. Pesticide exposure can be significantly reduced by not using them at home. Findings from a Spanish study suggest that a worrying source of exposure to phthalates in women is via household cleaning materials, including glass and oven cleaners and degreasing substances. While it is difficult to entirely avoid exposure to the flame retardants used in electronic equipment, shutting computers and televisions down at night can help – as can airing the room as often as possible.

The book also recommends individuals should be working with an association or a political party in order to be more effective in bringing about change. HEAL is cited as a well-respected non-governmental organisation to whom the author has referred others.

The top priorities for political and regulatory action include ensuring sufficient iodine supplies at national level for children and pregnant women and better regulation of EDCs. Action should be based on the precautionary principle while more research is directed to identifying the principal culprits and determining replacement strategies.


Toxic Cocktail: How Chemical Pollution Is Poisoning Our Brains by Barbara Demeneix is published by Oxford University Press.

The book has its own Facebook page at: https://www.facebook.com/ToxicCockt...