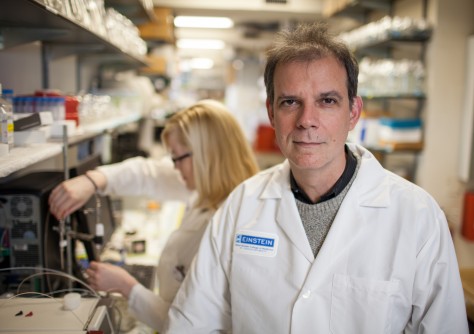 Newswise — January 7, 2014 — (BRONX, NY) — More women are choosing science careers, yet women are notoriously underrepresented in senior academic positions—often because they abandon their careers due to pessimism about advancement. New research suggests that putting more women in decision-making roles on the teams that organize symposia could offer a simple, effective step forward.

Now, a study in the January/February 2014 issue of the journal mbio and led by a researcher at Albert Einstein College of Medicine of Yeshiva University has identified a strategy for helping women climb the academic ladder. “Put at least one woman on the team that organizes a scientific symposium, and that team will be much more likely to invite female speakers,” said study co-author Arturo Casadevall, M.D., Ph.D., professor and chair of microbiology & immunology at Einstein, director of the College of Medicine’s Center for Immunological Sciences, and attending physician at Montefiore Medical Center, the University Hospital for Einstein.

The authors looked at scientific symposia involving nearly 2,000 speakers at three large general meetings sponsored by the American Society for Microbiology in 2011 through 2013. They focused on 104 all-male “convener teams” and 112 teams that included at least one woman.

The symposia convened by all-male teams contained 25 percent female speakers on average. For the symposia in which the convener teams included at least one woman, women comprised an average of 43 percent of speakers—which meant that including at least one woman among the conveners increased the proportion of female speakers by 72 percent compared with symposia convened by men alone.

“Participating in meetings as a speaker is an extremely important factor for academic advancement,” said Dr. Casadevall. “It’s a cascade effect – once you’re a speaker, your work is recognized, and you are more likely to make connections, have your work funded, and to be invited to speak again. And when you speak at a meeting, your reputation at your home institution also improves, and that helps your chances of promotion. So being an invited speaker at these meetings can definitely help advance your scientific career.”

Having a woman involved in choosing the speakers also reduced the chance that all of a symposium’s speakers would be men: About 30 percent of the symposia at these meetings had rosters of all-male speakers in cases where the convening team contained only men. But the percentage of all-male speakers was only about nine percent for symposia in which at least one member of the convening team was a woman. “All-male sessions can be a turn-off for younger female scientists,” said Dr. Casadevall. “They can send the message that the field has few women and that the upper echelons are dominated by men.”

The American Society for Microbiology has alerted its committees to the findings from this study. “We’ll see if this translates into changes,” Dr. Casadevall said. “The lack of women in leadership positions is a big problem in our field, but our findings suggest an easy remedy. I also hope that people in other fields take a look at this issue, and if they find they have similar gaps that they begin to talk about how to deal with it.”

The title of the paper is “The presence of female conveners correlates with a higher proportion of female speakers at scientific symposia.” Dr. Casadevall’s co-author was Jo Handelsman, Ph.D., of Yale University.