16-Mar-2018 11:05 AM EDT, by Perelman School of Medicine at the University of Pennsylvania contact patient services
favorite_border 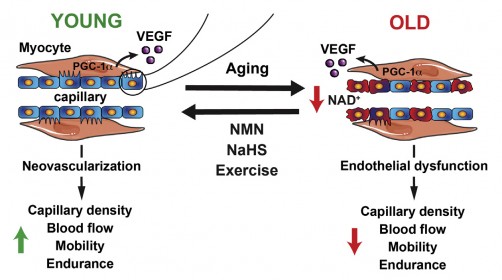 A well-studied enzyme called SIRT1 declines in the blood vessels with age and restoring it reverses the effects of vascular aging in mice. After receiving a supplement called NMN, older mice showed increased capillary density, blood flow, mobility, and endurance.

Newswise — PHILADELPHIA – As people age, their blood-vessel density and blood flow decrease, which is why it’s harder to maintain muscle mass after 40 and endurance in the later decades, even with exercise. This vascular decline is also one of the major causes of age-related diseases, such as frailty or hypertension. However, little is known about the underlying cause or how to stop it.

Now, in a new study published this week in Cell, a team of researchers from Penn Medicine and other institutions have shown for the first time how a well-studied enzyme called SIRT1 declines in the blood vessels with age and that restoring it reverses the effects of vascular aging. After receiving a supplement called NAD+ precursor nicotinamide mononucleotide (NMN), older mice had the number of capillaries and capillary density found in much younger mice, and improved endurance by up to 80 percent. The collaborative study also involves researchers from Harvard Medical School and Massachusetts Institute of Technology.

“This study tells us that the loss of SIRT1 is a primary reason why our ability to exercise and receive its benefits diminish as we age,” said co-senior author Zoltan Pierre Arany, MD, PhD, an associate professor of Cardiovascular Medicine in the Perelman School of Medicine at the University of Pennsylvania. “We also show that when we bring the enzyme back into the blood vessels, vascular health improves dramatically: The old blood vessel tree [cluster of capillaries] in the older mice is turned into a young vessel tree, one that looks like it’s been exercising for a while, just by turning on this enzyme. That’s the most powerful aspect of the study.”

The preclinical results show for the first time the ability to improve vascular health by increasing SIRT1, but they also have important implications for the prevention of age-related diseases, including cardiovascular disease, and aging itself. Identifying a target such as an enzyme that could be restored in a person’s vessels is an important step that could lead to new or modified existing therapeutics to treat diseases or slow down aging.

SIRT1 is a member of a family of enzymes that mediate the health benefits of diet and can extend lifespan when overexpressed, researchers have shown in past studies. It’s known that in young muscle SIRT1 is required for developing new and stronger blood vessels and is implicated in the deterioration of cells that line vessels. It was, however, unknown whether SIRT1 regulates vascular health in skeletal muscle tissue, and if so, whether its breakdown with age was reversible.

To test if SIRT1 was required for vessel creation and maintenance, the researchers knocked out its gene in mice and found that the density and number of capillaries was significantly lower compared to untreated mice, who in a high intensity endurance test ran twice as long as the mice without SIRT1.

Now, knowing that SIRT1 was necessary for vascularization, the researchers administered the NMN supplement to 18-month-old mice for two months and compared their blood vessels to six-month-old mice. NMN restored the number of capillaries and capillary density of the old mice to those typically seen in young mice and also dramatically increased their oxygen consumption. The most striking effect was a 56 to 80 percent improvement in endurance during a high-intensity, treadmill exercise test. Combining hydrogen sulfide, another molecule known to increase SIRT1, with NMN also increased capillary density in mice as old as 32 months compared to younger mice.

To the authors’ knowledge, this is the first time small molecules have induced the formation of new blood vessels at an advanced age in an animal model.

Overall, the researchers show in mice that loss of SIRT1 resulted in an early decline in skeletal muscle vascular density and exercise capacity, while overexpression of SIRT1 in older mice had a protective effect, ostensibly by sensitizing these cells to vascular endothelial growth factor coming from muscle fibers, the authors said.

The next step, Arany said, is to look for evidence of this mechanism at play in humans and for a more robust pharmaceutical agent that would be appropriate and effective for use in the clinic. NMN supplements marketed as having anti-aging properties exist today, but very few, if any, have clinical evidence to back up that claim. Researchers also used a larger dosage in the study compared to what’s on the market.

“We know that enzymes that regulate the fundamental metabolic program can go awry with age,” Arany said. “And we now know that turning that around and fixing it improves the health of aging blood vessels, sufficiently enough so that we can see differences in performance such as exercise capacity. We are still a long way away from testing in humans, but this gives us direction, a target to work with.”