A movie of the borophene islands growing in real time, obtained through low-energy electron microscopy. 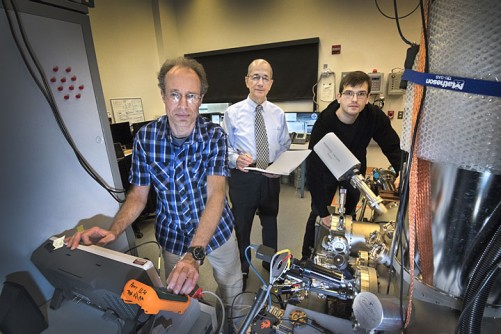 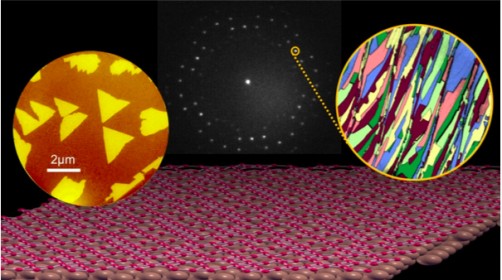 A schematic of hexagonal networks of boron atoms (pink), which are found on the hexagonal nodes and periodically in the center of the hexagon, grown on a surface of copper atoms (brown). The scientists used a low-energy electron microscope (LEEM) to watch "islands" of borophene (yellow triangles in left circle) grow, changing the temperature, deposition rate, and other growth conditions in real time to refine the "recipe." The islands can sit on the surface in six different orientations and can be discriminated by selecting an electron diffraction spot (such as the one circled in yellow) corresponding to a particular orientation (the one connected with the dotted line). Eventually the islands grow to such an extent that they touch and meet, and the entire surface (one centimeter squared) is covered with borophene, as seen in the circle on the right. The colors were added to distinguish regions with different orientations.

Newswise — UPTON, NY—Borophene—two-dimensional (2-D) atom-thin-sheets of boron, a chemical element traditionally found in fiberglass insulation—is anything but boring. Though boron is a nonmetallic semiconductor in its bulk (3-D) form, it becomes a metallic conductor in 2-D. Borophene is extremely flexible, strong, and lightweight—even more so than its carbon-based analogue, graphene. These unique electronic and mechanical properties make borophene a promising material platform for next-generation electronic devices such as wearables, biomolecule sensors, light detectors, and quantum computers.

Now, physicists from the U.S. Department of Energy’s (DOE) Brookhaven National Laboratory and Yale University have synthesized borophene on copper substrates with large-area (ranging in size from 10 to 100 micrometers) single-crystal domains (for reference, a strand of human hair is about 100 micrometers wide). Previously, only nanometer-size single-crystal flakes of borophene had been produced. The advance, reported on Dec. 3 in Nature Nanotechnology, represents an important step in making practical borophene-based devices possible.

For electronic applications, high-quality single crystals—periodic arrangements of atoms that continue throughout the entire crystal lattice without boundaries or defects—must be distributed over large areas of the surface material (substrate) on which they are grown. For example, today’s microchips use single crystals of silicon and other semiconductors. Device fabrication also requires an understanding of how different substrates and growth conditions impact a material’s crystal structure, which determines its properties.

“We increased the size of the single-crystal domains by a factor of a million,” said co-author and project lead Ivan Bozovic, senior scientist and Molecular Beam Epitaxy Group Leader in Brookhaven Lab’s Condensed Matter Physics and Materials Science (CMPMS) Department and adjunct professor of applied physics at Yale University. “Large domains are required to fabricate next-generation electronic devices with high electron mobility. Electrons that can easily and quickly move through a crystal structure are key to improving device performance.”

Since the 2004 discovery of graphene—a single sheet of carbon atoms, which can be peeled from graphite, the core component of pencils, with Scotch tape—scientists have been on the hunt for other 2-D materials with remarkable properties. The chemical bonds between carbon atoms that impart graphene with its strength make manipulating its structure difficult.

Theorists predicted that boron (next to carbon on the Periodic Table, with one less electron) deposited on an appropriately chosen substrate could form a 2-D material similar to graphene. But this prediction was not experimentally confirmed until three years ago, when scientists synthesized borophene for the very first time. They deposited boron onto silver substrates under ultrahigh-vacuum conditions through molecular beam epitaxy (MBE), a precisely controlled atomic layer-by-layer crystal growth technique. Soon thereafter, another group of scientists grew borophene on silver, but they proposed an entirely different crystal structure.

“Borophene is structurally similar to graphene, with a hexagonal network made of boron (instead of carbon) atoms on each of the six vertices defining the hexagon,” said Bozovic. “However, borophene is different in that it periodically has an extra boron atom in the center of the hexagon. The crystal structure tends to be theoretically stable when about four out of every five center positions are occupied and one is vacant.”

According to theory, while the number of vacancies is fixed, their arrangement is not. As long as the vacancies are distributed in a way that maintains the most stable (lowest energy) structure, they can be rearranged. Because of this flexibility, borophene can have multiple configurations.

A small step toward device fabrication

In this study, the scientists first investigated the real-time growth of borophene on silver surfaces at various temperatures. They grew the samples at Yale in an ultra-high vacuum low-energy electron microscope (LEEM) equipped with an MBE system. During and after the growth process, they bombarded the sample with a beam of electrons at low energy and analyzed the low-energy electron diffraction (LEED) patterns produced as electrons were reflected from the crystal surface and projected onto a detector. Because the electrons have low energy, they can only reach the first few atomic layers of the material. The distance between the reflected electrons (“spots” in the diffraction patterns) is related to the distance between atoms on the surface, and from this information, scientists can reconstruct the crystal structure.

In this case, the patterns revealed that the single-crystal borophene domains were only tens of nanometers in size—too small for fabricating devices and studying fundamental physical properties—for all growth conditions. They also resolved the controversy about borophene’s structure: both structures exist, but they form at different temperatures. The scientists confirmed their LEEM and LEED results through atomic force microscopy (AFM). In AFM, a sharp tip is scanned over a surface, and the measured force between the tip and atoms on the surface is used to map the atomic arrangement.

To promote the formation of larger crystals, the scientists then switched the substrate from silver to copper, applying the same LEEM, LEED, and AFM techniques. Brookhaven scientists Percy Zahl and Ilya Drozdov also imaged the surface structure at high resolution using a custom-built scanning tunneling microscope (STM) with a carbon monoxide probe tip at Brookhaven’s Center for Functional Nanomaterials (CFN)—a U.S. Department of Energy (DOE) Office of Science User Facility. Yale theorists Stephen Eltinge and Sohrab Ismail-Beigi performed calculations to determine the stability of the experimentally obtained structures. After identifying which structures were most stable, they simulated the electron diffraction spectra and STM images and compared them to the experimental data. This iterative process continued until theory and experiment were in agreement.

“From theoretical insights, we expected copper to produce larger single crystals because it interacts more strongly with borophene than silver,” said Bozovic. “Copper donates some electrons to stabilize borophene, but the materials do not interact too much as to form a compound. Not only are the single crystals larger, but the structures of borophene on copper are different from any of those grown on silver.”

Because there are several possible distributions of vacancies on the surface, various crystal structures of borophene can emerge. This study also showed how the structure of borophene can be modified by changing the substrate and, in some cases, the temperature or deposition rate.

The next step is to transfer the borophene sheets from the metallic copper surfaces to insulating device-compatible substrates. Then, scientists will be able to accurately measure resistivity and other electrical properties important to device functionality. Bozovic is particularly excited to test whether borophene can be made superconducting. Some theorists have speculated that its unusual electronic structure may even open a path to lossless transmission of electricity at room temperature, as opposed to the ultracold temperatures usually required for superconductivity. Ultimately, the goal in 2-D materials research is to be able to fine-tune the properties of these materials to suit particular applications. 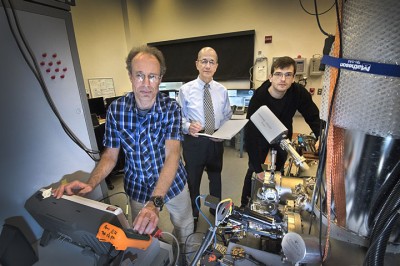 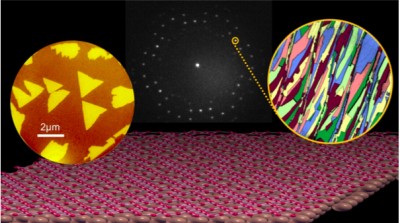 Caption: A schematic of hexagonal networks of boron atoms (pink), which are found on the hexagonal nodes and periodically in the center of the hexagon, grown on a surface of copper atoms (brown). The scientists used a low-energy electron microscope (LEEM) to watch "islands" of borophene (yellow triangles in left circle) grow, changing the temperature, deposition rate, and other growth conditions in real time to refine the "recipe." The islands can sit on the surface in six different orientations and can be discriminated by selecting an electron diffraction spot (such as the one circled in yellow) corresponding to a particular orientation (the one connected with the dotted line). Eventually the islands grow to such an extent that they touch and meet, and the entire surface (one centimeter squared) is covered with borophene, as seen in the circle on the right. The colors were added to distinguish regions with different orientations.