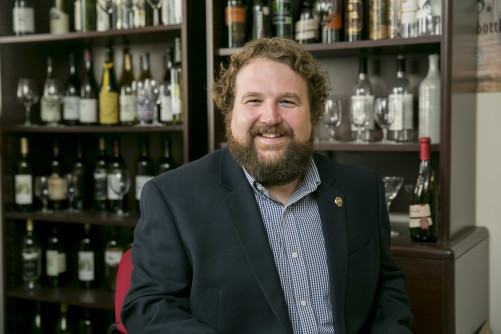 Newswise — A Texas Tech University doctoral student won a $10,000 grant to study how millennials respond to the way in which wines are packaged.

Nicholas Johnston, who is starting his final year in the hospitality administration graduate program in the Department of Hospitality and Retail Management, has studied consumer behavior for years, most recently in a research setting but for several years before that as a bartender. When he saw a request for proposals from the Wine Market Council, a nonprofit group of growers, producers, importers and wholesalers, regarding how to market wine, he and associate professor Natalia Velikova, who also is associate director of the Texas Wine Marketing Research Institute, put together a grant proposal to find out what kind of containers catches the millennial generation’s dollars.

His idea was one of three finalists selected from throughout the country. After a conference call with the council’s board of directors, his proposal was selected.

“Nicholas really stood out because of his expertise in research and strong interest in wine,” said Jennifer Pagano, director of research for the Wine Market Council. “We were also encouraged by the commitment of his adviser, Dr. Velikova.”

Johnston’s proposal includes dividing millennials, who range from 21 to 38 years old, into two to three segments and conducting focus groups within those segments. He’ll find out what appeals to these groups in terms of packaging, be it the traditional 750-milliliter bottle or less traditional bag-in-box wine or even aluminum cans.

He’ll use the information from those focus groups to craft a survey to be distributed to millennials nationwide asking similar questions about how millennials view wine packaging.

“Previous research shows us that if you as a consumer are interested in buying wine, you would think that wine that was served in this bottle is better quality overall,” he said.

Based on research he’s already done and anecdotal evidence from time spent around wine, Johnston has a couple of hypotheses. He thinks millennials, particularly the younger half of the group, will find characteristics like portability attractive. Wine in a pouch will be a viable option. The older half of the generation he suspects will feel the 750-mL bottle is more authentic and that better wine comes in that sort of packaging.

However, he sees the alternative packaging appealing to those people in their mid-30s who already like a particular brand of wine.

“Because they are familiar with its quality, the packaging might become less important,” he said.

Focus groups will begin in early September, and Johnston will recruit participants from the Texas Tech and greater Lubbock communities. He plans to launch the online survey in early October and should have data by the end of the year. He’ll present his findings at one of the Wine Market Council’s conferences in early 2016.

“This is a wonderful opportunity for Nick, the department, the Texas Wine Marketing Research Institute and Texas Tech,” Velikova said. “The fact that a world-renowned California-based agency funded a graduate student from Texas Tech to conduct a nationwide study for them is truly remarkable.”