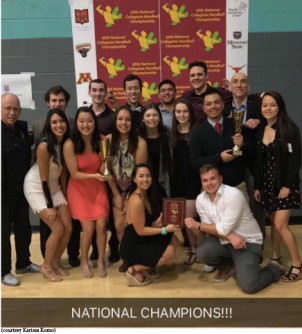 Huestis, who had never played handball before this year, cruised in her first two singles matches, outscoring her opponents by a combined score of 84-2. She recorded four shutouts and advanced to the Women’s B1 Division semifinals.

In addition to Huestis, three other Boxers also advanced to the semifinal rounds in their respective singles divisions: Geoff Kastel (Men’s C2), Ryan Noborikawa (Men’s C3) and Macie Akai (Women’s B1). Steinberg noted that the other Boxer players contributed as well, amassing enough crucial points to win the team events.

In all, the Boxers compiled an impressive 41-21 singles record against a tournament field comprised mostly of large public universities, including Texas (4-1), Texas A&M, Michigan State (3-0), Illinois (2-0), Minnesota (3-1) and the University of California, Berkeley. Only host institution Arizona State posted a winning head-to-head singles record against the Boxers, which finished 5th out 37 universities in the overall standings.

“This year was a repeat of last year’s stellar performance, only this time the accomplishments were done with eleven new players,” Steinberg said. “Only three players returned from the 2016 squad, making this performance even more remarkable. This is my fourth year with the program, and seeing such athletic improvement and competitive spirit is a real privilege."