'Boys Will Be Boys' and 'She Just Likes Him' Wrong Approach to Bullying, Expert Says 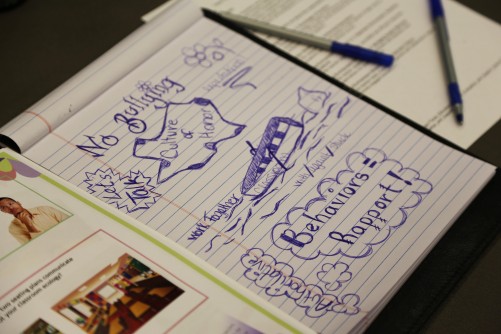 A student’s doodles during a bullying workshop at Texas Tech 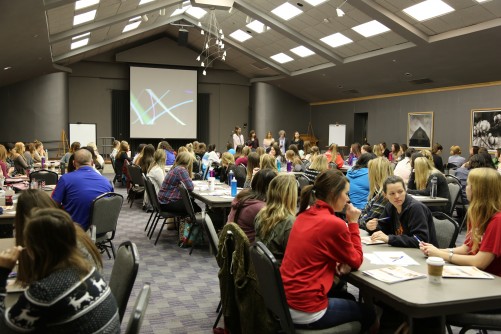 TechTeach program gather in the Matador Room of the Student Union for a bullying seminar. 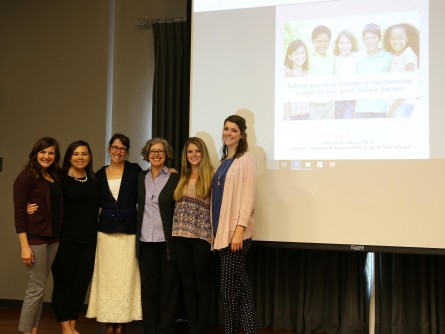 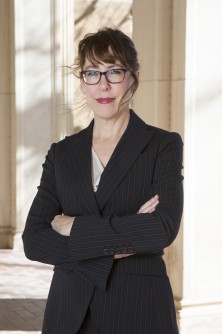 One – the boy who instigated the fight, who, viewers learn in a moment, has been harassing, name-calling and beating up the other boy for weeks – sticks out his hand. No problem, his body language said. I can pretend to be sorry.

The other boy, Cole, is physically smaller. He keeps his hand at his side. He tries to walk away; the assistant principal calls him back and chastises him. She refuses to listen to his protests, that he is a victim and he doesn’t want this boy touching him. After a moment of struggle, he sticks out his hand. The insincerity of the exchange radiates from the screen.

This scene from “Bully,” a 2011 documentary about bullying in American schools, was on the big screen in a workshop Friday aimed at preparing teachers to prevent bullying. More than 100 student teachers from the College of Education at Texas Tech University watched this play out mostly in silence. Gasps or disbelieving laughter penetrated the quiet a few times, but for the most part they just observed.

As pre-service teachers, they are co-teaching in public school classrooms in Lubbock and surrounding areas. They’ve seen kids push, tease and manipulate. The middle school teachers all recognize this scene exactly. It has played out in their classrooms, hallways, school buses and cafeterias. A few handled it well. Others wished they’d handled it differently. Most didn’t know what to do. Sometimes they weren’t sure if what they saw was bullying or something else.

“In order for students to be prepared to learn, they must first feel safe and supported,” Ridley said. “That’s impossible to achieve in an environment where bullying is pervasive. A main focus of teacher reform is ensuring teacher candidates are prepared to be the best possible educators, but also that they are great classroom managers, knowledgeable and experienced in creating the right environment for learning. Dr. Hawley and her colleagues are doing amazing work toward that end.”

What is bullying?Bullying is defined by three factors: aggression (intent to harm), repetition (actual or potential) and a difference in power. Without all of those factors being present, a situation may be negative, but it is not bullying per se. Knowing what bullying is – and isn’t – is essential for implementing interventions against it. These interventions, Hawley said, begin with teachers understanding the social dynamic in their classrooms so they can immediately act when they see bullying and protect vulnerable victims.

Phillips started the workshop by asking students at each table to write down what they considered bullying, as a way to assess what pre-conceived ideas they had about bullying. Included on the list were hitting, teasing, calling names, spreading rumors, ostracizing, sexual harassment and harassing on social media, among many other behaviors. The students shared stories, first with their tables and then with each other.

Coffey told a story about her son, who in elementary school was getting regularly beaten up by a little girl in his class. When Coffey spoke to the girl’s mother, she brushed it off with, “oh, she just likes him.”

One third-grade class all jumped over a red line in the hallway; the teacher thought it was just a game but then found out the students said anyone who stepped on this line liked a little boy who none of them wanted to like. The boy knew about it.

“It’s kind of crazy what kids can come up with,” Stewart said.

Common things people say may make the power dynamic worse: “Boys will be boys.” “Toughen up.” “He didn’t mean it.” These statements both excuse the bully and invalidate the harm that is being done.

Every disagreement or negative interaction, however, does not rise to the level of bullying. The assistant principal in the movie scene saw only an everyday disagreement, not bullying. In demanding equal-sided reconciliation, she revictimized the target of the bullying and validated the bully’s power.

Who is most vulnerable?The children most at risk of being bullied are those who have less power. In a school setting, they may be less popular, socially awkward, economically disadvantaged, low-achieving or an ethnic or sexual minority. Other children find differences to mock – an English language learner’s accent or a low-income student’s clothing.

“Oftentimes the kids who are targeted are the ones who can’t defend themselves,” Wargo said.

Who are the bullies?In Carpenter’s first year as a teacher, she watched her class closely and thought she had picked out the likely bullies and victims. However, as she learned about social dynamics, she learned her students had a better understanding of the classroom’s power structure than she did. So she discreetly asked each child.

To Carpenter’s shock, every student in her classroom named one little girl as a bully.

“It was one of my favorite students,” she said. “She was an expert manipulator, and I thought she was the popular kid.

This isn’t atypical. Many bullies project one image to teachers and another to their peers. They also bully more subtly.

Bullies also like attention. They frequently have an audience when they’re bullying another student, and this positive attention may reinforce and strengthen the negative behavior.

Where does bullying happen?The short answer is everywhere – classrooms, hallways, cafeterias, the bus, the gym, the playground, the walk to and from school and increasingly, the Internet and phones.

Much of this bullying happens in view of teachers. All too often, teachers don’t know what to look for, have misconceptions about what bullying is or are unaware of the harm to the youth involved or unsure about what to do. Students know this and feel a sense of immunity. Often, everyone in the room agreed, they’re right.

“It happens in plain sight because the students think teachers aren’t watching or don’t care,” Hawley said. “Kids are feeling out the ecology of the school, and they know what they can get away with when they’re in front of you.”

This is not because teachers don’t care, she said. Rather, they are underprepared and undersupported and sometimes feel powerless. As a consequence, victims learn quickly that reporting bullying is not effective in stopping the problem. Teachers should actively seek out information from their classes.

Teachers also need to talk to each other, to the school nurse and to administrators. A student may complain about being bullied multiple times but to a different person each time, and if no one shares the information the organization doesn’t know how severe the bullying is.

“You cannot assume just because nobody is reporting it that bullying is not an issue in this classroom,” Wargo said.

Many of the student teachers said they worried about this. One student wondered what should be ignored and what needs to be addressed.

The pre-service teachers also were encouraged to notice bullying outside of their classroom. Carpenter once saw a number of children beating up a boy outside of the school. It was across the street and not on school property, and it was after school let out. Regardless, she charged across the street – the only one of half a dozen adults who saw it – and stopped the fighting. Hawley said this is why teachers need to understand the “bystander effect” – the more people who witness an event, the less likely any one person is to break from the crowd to help – and help their students overcome it.

One of the best ways to combat bullying is empowering bystanders to do more. An audience to bullying has layers, the team explained. Besides the bully and the victim there are those who assist the bully and those who reinforce the behavior with attention, laughing and jeering. Another layer is the well-intentioned bystanders who are merely observing. These children are a good target for intervention efforts. Teachers can empower them to report incidents they observe. They also can be encouraged to ask the bully to stop.

For this empowerment to happen, teachers must be more than bystanders themselves, which can be hard. The point of the workshop was to teach developing teachers what to look for, explain the complex social dynamic and suggest how they can navigate it successfully to counteract bullying regardless of administrative support of a formal bullying prevention program. 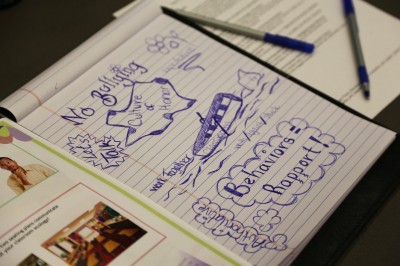 Caption: A student’s doodles during a bullying workshop at Texas Tech 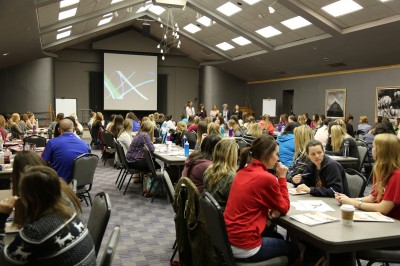 Caption: TechTeach program gather in the Matador Room of the Student Union for a bullying seminar. 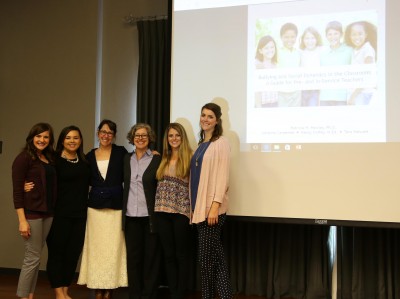 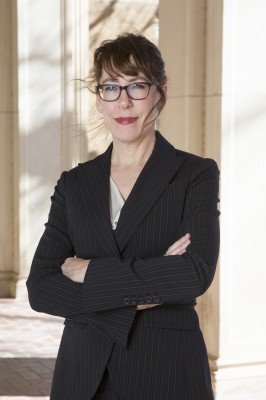