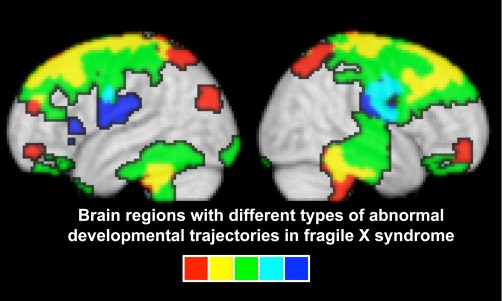 Newswise — Brain changes associated with the most common cause of mental retardation can be seen in magnetic resonance imaging (MRI) scans of children as young as one to three years old, according to a study by researchers at the University of North Carolina at Chapel Hill and Stanford University.

“This means that the brain changes that are indicative of Fragile X syndrome had already taken place before these children were enrolled in our study,” said Joseph Piven, MD, director of UNC’s Carolina Institute for Developmental Disabilities and one of two senior researchers overseeing the project. “In addition, their brains continued to change during the course of the study in ways that we did not expect.”

These results, from the first longitudinal brain imaging studies of children with Fragile X syndrome, were published online in this week’s early edition of the Proceedings of the National Academy of Sciences. The other senior researcher is Allan L. Reiss, MD, director of the Center for Interdisciplinary Brain Sciences Research (CIBSR) at Stanford University School of Medicine.

Fragile X is the most common inherited form of mental retardation and is more commonly associated with autism than any other known genetic condition. One third of people with Fragile X also have autism and another third have autistic features, Piven said.

In the study, Reiss, Piven and study co-authors analyzed MRI brain scans taken at two different points in time over a two-year period from 41 boys ages 1 to 3 with a confirmed diagnosis of Fragile X syndrome. They then compared these to scans from 28 age and developmentally matched boys without Fragile X.

The results showed that in boys with Fragile X, a part of the brain called the caudate head was already enlarged at the time of first measurement and continued to enlarge at a constant rate during the study. They expected to find an enlarged caudate in these boys, Piven said, but the information on the longitudinal trajectory of development of the caudate and other brain structures is new information.

Other brain structures, such as the thalamus, were the same size in children with Fragile X and controls at the start of the study but grew at a faster rate in the Fragile X group between ages 1 and 3 years. “Our study describes a picture of growth of important structures in the brain over this interval and that gives us clues to what’s going on before these kids get to age 24 months, as well as brain changes during this important, two-year interval,” Piven said.

“Because we know what gene causes Fragile X, the FMR1 gene, and we know where in the brain this gene is expressed, these findings provide important targets for potential early intervention and monitoring of the effects of interventions for the behavioral and cognitive problems in individuals with Fragile X syndrome. There are pharmaceutical compounds currently in clinical trials for treating Fragile X syndrome that are rationally derived, targeted treatments for Fragile X based on our understanding of the neurobiological functioning underlying Fragile X syndrome. Eventually we hope that we will be able to monitor the effects of these interventions on particular parts of the brain identified in this study and draw inferences about which parts of the brain are the most important targets in Fragile X,” Piven said.

In addition to Piven and Reiss, authors of the study were Heather Cody Hazlett, PhD, of UNC and Fumiko Hoeft, MD, PhD; John C. Carter, and Amy A. Lightbody, PhD, all from Stanford.

UNC is the lead site on another National Institutes of Health-funded study of early brain development in Fragile X, collaborating with researchers at Washington University in St. Louis. In that study researchers are obtaining MRI brain scans of infants with Fragile X at six months, 12 months and 24 months of age. The latter study, which is part of UNC’s ongoing Infant Brain Imaging Study (IBIS) network, will help researchers understand the brain changes occurring in individuals with Fragile X Syndrome even before those described in the present study and will provide clues to early intervention and prevention of symptom emergence in this important disabling condition, Piven said.