Three clinical trial participants with paralysis chatted with family and friends, shopped online and used other tablet computer applications, all by just thinking about pointing and clicking a mouse. 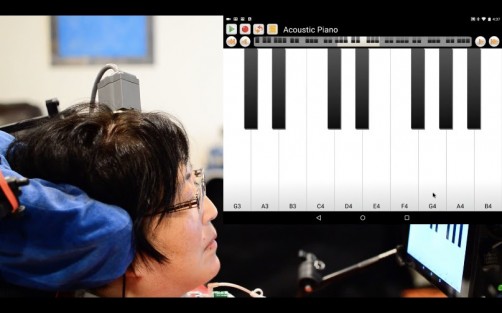 A participant in the BrainGate clinical trial directly controls a tablet computer through a brain-computer interface. The participant, a musician, played a snippet of "Ode to Joy" on a digital piano interface. The research, published in PLOS ONE, is a step toward restoring the ability of people with paralysis to use everyday technologies

Three clinical trial participants with paralysis chatted with family and friends, shopped online and used other tablet computer applications, all by just thinking about pointing and clicking a mouse.

Newswise — An investigational brain-computer interface (BCI) can enable people with paralysis to directly operate an off-the-shelf tablet device by thinking about making cursor movements and clicks, according to a study published November 21, 2018 in the open-access journal PLOS ONE by Paul Nuyujukian, Jose Albites-Sanabria, and Jad Saab from the BrainGate consortium, USA, and colleagues.

Three clinical trial participants with tetraplegia received the investigational BrainGate brain-computer interface implant, which detects the signals associated with intended movements produced in the brain’s motor cortex.  These neural signals were routed to a Bluetooth interface configured to work like a wireless mouse. The virtual mouse was then paired to an unmodified Google Nexus 9 tablet, which had all preloaded accessibility software turned off.

The participants were then asked to perform a set of tasks using the tablet, designed to see how well they were able to navigate within a variety of commonly used apps, and move from app to app. The participants browsed through music selections on a streaming service, searched for videos on YouTube, scrolled through a news aggregator and composed emails and chats.

The study showed that participants were able to make up to 22 point-and-click selections per minute while using a variety of apps. In text apps, the participants were able to type up to 30 effective characters per minute using standard email and text interfaces.  Additionally, the participants reported finding the interface intuitive and fun to use. One said, “It felt more natural than the times I remember using a mouse.” Another reported having “more control over this than what I normally use.”

The authors note that this study has the potential to open important new lines of communication between patients with severe neurological deficits and their health care providers, especially since the brain-computer interface system does not require a special assistive communication technology to function.

“It was great to see our participants make their way through the tasks we asked them to perform, but the most gratifying and fun part of the study was when they just did what they wanted to do — using the apps that they liked for shopping, watching videos or just chatting with friends,” said lead author Dr. Paul Nuyujukian. “One of the participants told us at the beginning of the trial that one of the things she really wanted to do was play music again. So to see her play on a digital keyboard was fantastic.”

Adapted by PLOS from a press release provided by the authors.

In your coverage please use this URL to provide access to the freely available article in PLOS ONE:  http://journals.plos.org/plosone/article?id=10.1371/journal.pone.0204566

Image Caption: A participant in the BrainGate clinical trial directly controls a tablet computer through a brain-computer interface. The participant, a musician, played a snippet of "Ode to Joy" on a digital piano interface. The research, published in PLOS ONE, is a step toward restoring the ability of people with paralysis to use everyday technologies

Funding: This work was supported by the Stanford Medical Scientist Training Program to PN; Stanford Office of Postdoctoral Affairs and Craig H. Neilsen Foundation to CP; Stanford BioX-NeuroVentures, Stanford Neurosciences Institute, Garlick Foundation, and Samuel and Betsy Reeves to JMH and KVS; NIH-NIDCD R01DC014034 to JMH; NIH-NINDS R01NS066311 and Howard Hughes Medical Institute to KVS; NIH-NIDCD R01DC009899, Office of Research and Development, Rehabilitation Research and Development Service, Department of Veterans Affairs (B6453R), MGH-Deane Institute, Massachusetts General Hospital Executive Committee on Research, and Joseph Martin Prize for Basic Research to LRH. The content is solely the responsibility of the authors and does not necessarily represent the official views of the NIH, the Department of Veterans Affairs, or the US government. Caution: Investigational device. Limited by federal law to investigational use.

Competing Interests: I have read the journal’s policy and the authors of this manuscript have the following competing interests: KVS is a consultant for Neuralink Inc. and on the Scientific Advisory Boards of Cognescent Inc. and Heal Inc. JMH is a consultant for Circuit Therapeutics and Enspire DBS and is on the Surgical Advisory board of Neuropace Inc. This does not alter our adherence to PLOS ONE policies on sharing data and materials