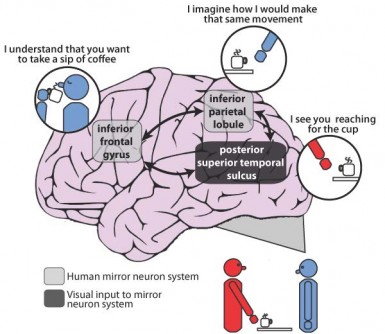 Illustration of the mirror neuron system in the human brain which has been implicated in the impaired imitation ability of many patients with schizophrenia.

Now, the results of a brain-mapping experiment conducted by a team of neuroscientists at Vanderbilt University strengthen the theory that an impaired ability to imitate may underlie the profound and enduring difficulty with social interactions that characterize schizophrenia. In a paper published online on Mar. 14 by the American Journal of Psychiatry, the researchers report that when patients with schizophrenia were asked to imitate simple hand movements, their brains exhibited abnormal brain activity in areas associated with the ability to imitate.

“The fact that patients with schizophrenia show abnormal brain activity when they imitate simple hand gestures is important because action imitation is a primary building block of social abilities,” said first author Katharine Thakkar, who conducted much of the research while completing her doctoral program at Vanderbilt and is now a post-doctoral fellow at the University Medical Center in Utrecht. “The ability to imitate is present early in life and is crucial for learning how to navigate the social world. According to current theory, covert imitation is also the most fundamental way that we understand the intentions and feelings of other people.”

Schizophrenia is one of the top 10 causes of disability in developed countries worldwide. It is also an extremely costly disorder. An economic study published in 2005 estimated that the overall cost of treating schizophrenia in the U.S. in 2002 was $62.7 billion. One of the main barriers to recovery for many people with schizophrenia is their profound and enduring difficulty with social interactions. This makes it difficult for them to have relationships or maintain employment. These social impairments manifest in many different ways, ranging from paranoia that other people intend to hurt them to withdrawing completely from social interactions, and severely impact their quality of life.

“As people with schizophrenia commonly have major social problems, understanding their origin, both neurobiological and behavioral, is critically important,” Philip D. Harvey, professor of psychiatry and behavioral sciences at the University of Miami Miller School of Medicine, stated in a commentary that accompanies the paper. “While study of the activation of the brain while observing versus imitating hand movements may seem too specific to be relevant, it is actually targeting a critical learning process with specific relevance to social functioning.”

The new study is the first to use functional magnetic resonance imaging, which maps levels of brain activity by measuring associated changes in blood flow, to examine the brain activity of schizophrenia patients while performing basic imitation tasks. It was performed on 16 medicated schizophrenia patients and 16 healthy participants. While lying in the scanner, participants watched a computer display that showed either a video of a hand pressing buttons on a button box or an animation of an ‘X’ that moved to different fingers on a still image of a hand. Participants were given three different instructions: push the same button as the hand in the video; push the button under the finger marked with the 'X;' or simply observe the display. As a result, the experimenters could look at brain activation associated with imitation (pressing buttons while watching a video of a moving hand) and non-imitative action (pressing buttons while watching the moving ‘X’).

The researchers found that the individuals with schizophrenia showed altered brain activity levels in regions of the brain that prior studies in primates have identified as crucial for imitation. During imitation, the patients had less activation than healthy individuals in brain regions involved in detecting biological movement – the special way in which living things move – and also in regions involved in transforming this visual information into a plan for movement. At the same time, patients with schizophrenia had more activation than the healthy participants in these same regions when they performed non-imitative actions.

“Essentially, the brain network involved in imitation appears less specialized for social information in patients with schizophrenia,” said Sohee Park, Gertrude Conaway Vanderbilt Chair of Psychology, who directed the study. “The brain network involved in processing social stimuli is finely tuned in healthy people, but is out of tune in individuals with schizophrenia."

The specific areas of the brain that become over-active and under-active are associated with the “mirror neuron” system. Mirror neurons are networks of neurons that fire both when an animal acts and when it observes the same action performed by another. They have been directly observed in the brains of primates. In humans, neuroscientists have located areas using brain-mapping techniques that appear to act in a similar fashion.

“The mirror neuron system raises the question of agency,” Park observed. “If the same group of neurons fire when I am writing and when I watch you writing, how do I know who is doing the writing? But we are almost always certain of who is doing what. Our research implicates the role of this network in individuals with schizophrenia who frequently have serious problems determining agency.”

Because the disorder appears to be a matter of improperly tuned brain circuitry, Park does not hold much hope for attempts to find a drug to treat schizophrenia. “No one pill can do the job,” she said. Instead, the neuroscientist sees greater promise in developing training methods to improve schizophrenia sufferers’ basic cognitive skills, like imitation: “We need to be innovative and make use of the brain’s plasticity to develop new technology that can rewire their brains from the bottom up. We are currently working with a robotics engineering group led by Vanderbilt Professor of Mechanical Engineering Nilanjan Sarkar to make this happen.”