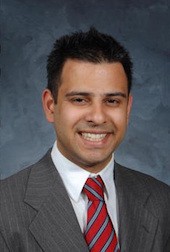 Newswise — Increasingly, doctors are treating lung cancer based on the genetic rearrangements driving the disease. For example, cancers that are driven by changes in the genes ALK, EGFR, and ROS1 can now all be paired with drugs that target these specific changes. However, these cancers are not only dangerous in the lung where they appear, but can become especially dangerous if they are able to metastasize to the brain – a common cause of death from lung cancer. And some targeted treatments work better than others against cancer that has spread to the brain.

“Our study was novel in that we compared the incidence of brain metastases in newly diagnosed stage IV ROS1 patients not only with ALK patients, but also with EGFR, KRAS, BRAF and others. When we compared across multiple gene cohorts, we did not find a signal that ROS1 cancers were less likely metastasize to the brain at time of diagnosis,” says Tejas Patil, MD, oncology fellow at CU Cancer Center and instructor at CU School of Medicine. “Thus, it seems these genes have the same likelihood of brain metastases at time of diagnosis. The finding implies that ROS1 cancers are no more or less predisposed than other oncogene-driven cancers to metastasize to the brain.”

The group also examined the outcomes of ROS1 and ALK patients treated with the drug crizotinib, which targets both ROS1- and ALK-rearranged cancers. A common measurement of a drug’s success is progression-free survival (PFS), or the duration during which a drug keeps a cancer from growing. When cancer progresses, it often implies that the disease has evolved resistance to the drug. In this case, PFS on crizotinib for ROS1 patients was 11 months, compared with PFS of 8 months for ALK patients.

However, when either of these cancers progressed on crizotinib, it often did so in the brain or central nervous system. In 47 percent of ROS1 patients, the brain was the first and only site of progression, meaning that while the drug continued to control cancer elsewhere in the body, it was unable to act as efficiently against ROS1 cancer in the brain.

The challenge is that many targeted therapies including crizotinib are simply too large to pass through the barrier that protects the brain from the rest of the body. If a drug cannot cross the blood-brain barrier, it can’t target the growth of cancer within that wall.

“I think this study clarifies the need to develop targeted therapies with brain penetration against these oncogene-addicted lung cancers,” Dr. Patil says.

In fact, new targeted therapies for EGFR+ and ALK+ lung cancers are showing tremendous promise in moving into the brain to target this common location of metastasis. Dr. Patil points out that it is everyone’s hope that drug development for ROS1 lung cancers will follow a similar trajectory, helping to control cancer not only at its site of first occurrence, but also within the brain, a common site of progression.