According to a new report by researchers at Ryerson University's Centre for the Study of Commercial Activity, more foreign retailers are eyeing Canada to expand their customer base. Joe Aversa, lead author of the report and a GIS analyst tells us more. 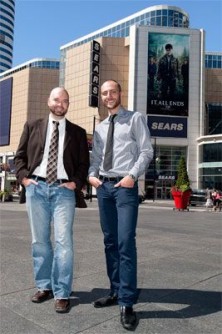 More popular U.S. retail powerhouses are eyeing Canada as an untapped market to expand their customer base, according to a new report by Ryerson University's Centre for the Study of Commercial Activity. Pictured left to right: Chris Daniel, co-author, and Joe Aversa, lead-author of the report. Tony Hernandez (not in this picture) is the other co-author and director of the research centre.

Newswise — TORONTO, July 21, 2011 --- Canadians may not need to endure the long line-ups at the border to buy their favourite labels at U.S. retail outlets anymore. According to a new report by researchers at the Ryerson University Centre for the Study of Commercial Activity, more U.S. popular retail powerhouses are eyeing Canada as an untapped market to expand their customer base than ever before.

“International retailers, especially from the U.S., have long been part of the Canadian marketplace,” said Joe Aversa, a GIS analyst at the centre and lead author of the report, Foreign Retail Chains in Canada. “However, the global recession has made it difficult for them to achieve growth in the U.S. market. So, American and other foreign retailers are now looking for other ways to grow and Canada is seen as a ‘safe’ test bed.”

Co-authors of the report are Tony Hernandez, director of the Centre for the Study of Commercial Activity, and Christopher Daniel, a senior GIS analyst at the centre.

Going forward, Hernandez predicts the impact of foreign retailers in the Canadian marketplace will continue to increase. “Foreign-owned retailers will be part of the evolution of retailing and the competitive landscape. As a result, Canadian retailers will need to sharpen their game through competitive pricing and product selection, as well as through merchandising and advertising.”

U.S. retailers who have recently expanded into Canada include the Apple Store, Coach, Bath and Body Works, Lowe’s and Marshalls. Target – a heavy-weight American retailer – is poised to open up to 150 Canadian stores in 2013.

Although U.S.-based companies operate nine out of every 10 foreign-owned stores in Canada, major retailers from Europe and Asia have also joined the Canadian retail scene during the last decade. They include Sephora (France), H&M (Sweden) and The Sony Store (Japan). The majority of all foreign-owned retailers are based in major markets (e.g., Toronto, Montreal, Vancouver, Calgary and Edmonton), and more than half are located in malls.

The researchers believe foreign retailers are attracted to Canada for several reasons. In the case of American retailers, the countries’ close proximity, shared popular culture and common official language allows for a smoother transition process for retail concepts and store formats. The exception to this rule is Quebec. The report found that although the province accounts for 23 per cent of the national population, it is home to only 13.5 per cent of Canada’s foreign-owned leading retailers.

Across Canada, certain retail segments have been especially affected by the presence of foreign retail chains. For instance, the level of foreign-controlled market share has grown significantly in the general merchandise category (Wal-Mart, Wal-Mart Supercentre and Costco), and in the electronics and appliances sector (Best Buy, Future Shop). However, Canadian-based retailers still control the lion’s market share of the grocery and pharmacy/personal care sectors, according to the report.

Ryerson University is Canada's leader in innovative, career-oriented education and a university clearly on the move. With a mission to serve societal need, and a long-standing commitment to engaging its community, Ryerson offers more than 100 undergraduate and graduate programs. Distinctly urban, culturally diverse and inclusive, the university is home to 28,000 students, including 2,000 master's and PhD students, nearly 2,700 faculty and staff, and more than 130,000 alumni worldwide. Research at Ryerson is on a trajectory of success and growth: externally funded research has doubled in the past four years. The G. Raymond Chang School of Continuing Education is Canada's leading provider of university-based adult education. For more information, visit www.ryerson.ca