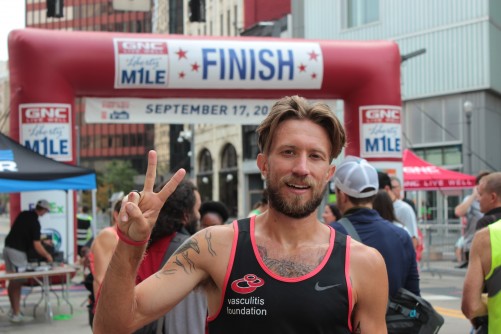 Brandon Hudgins, a star runner and vasculitis patient, will speak to a group of youth patients ranging in ages from 15- to 30-years-old, at the Vasculitis Foundation's 2017 International Vasculitis Symposium being held at Chicago Marriot O’Hare Hotel in Chicago, Illinois June 23-25, 2017.

Hudgins, along with a panel of three other young adult patients who overcame limitations to achieve personal success, will talk about his challenges with the rare, autoimmune disease during the session on Friday, June 23, from 4:15 – 5:00 p.m. He will also be signing autographs, and talking about his forthcoming book with symposium attendees throughout the weekend.

Hudgins will stress his mantra of “Personal Bests”, which, as he says, on some days “can be as seemingly simple as just getting out of bed and attempting a smile”. He will also discuss his journey with vasculitis, the power of positive thinking, and how community building is crucial for patients and caregivers.

“When you’re battling a rare disease that nobody understands, it’s important to form community. I’m honored to partner with the Vasculitis Foundation and lead the Victory Over Vasculitis campaign, which allows me to connect with patients via social media, webinars and at the upcoming Symposium,” says Hudgins.

The Vasculitis Foundation collaborated with Brandon in 2016 to support his training for the 2016 Summer Olympics. This year, Victory Over Vasculitis is helping even more patients living with vasculitis and their family members achieve their own “Personal Bests”.   More information about this VF campaign can be found at:  www.vasculitisfoundation.org/victory-over-vasculitis_2/

Brandon’s personal experience as a patient and his educational background (BA in Physical Education Fitness and Wellness and an MS in Exercise Science: Strength and Conditioning from Winthrop University) gives him a unique perspective and understanding on motivating patients living with chronic illnesses.

Hudgins was diagnosed with Granulomatosis with polygangiitis, a type of vasculitis which attacks the small blood vessels in your body in 2008 while completing his junior year at Winthrop University and training for future Olympic glory.

“Despite several relapses, intense chemo therapy, nearly losing his kidneys, briefly quitting the sport, and the physical and mental toll of dealing with a rare, autoimmune disease, Hudgins has risen as a golden vasculitis advocate. He’s a true inspiration, and we are delighted to have him join us at the Symposium in Chicago,” says Karen Hirsch, president of the Vasculitis Foundation.

According to the Cleveland Clinic, which has long been active in vasculitis research, the prevalence of specific types of vasculitis in the United States is about 3/100,000 population for granulomatosis with polyangiitis (Wegener's granulomatosis), 3/100,000 for polyarteritis nodosa, 26/100,000 for giant cell arteritis, and 1/100,000 for Takayasu arteritis. For just this small sample of selected vasculitides, the combined prevalence is over 30/100,000 population. About 100,000 Americans per year are hospitalized for care of vasculitis, and while its impact is most significant among patients and their families, it also impacts society through its effect on the U.S. workforce and health care system.

The Vasculitis Foundation is the international advocacy organization for people with vasculitis. The VF empowers patients through disease education, raises awareness of vasculitis in the general public and medical community, and funds research to determine the cause, develop more effective treatments, and discover a cure.  The VF is committed to improving the lives of current and future patients and is positioned as the definitive resource for patients, family members, medical professionals and researchers seeking information about vasculitis. For information about vasculitis and the Vasculitis Foundation, please visit www.vasculitisfoundation.org.