Documentary by UC San Diego grads being shown in theaters and now available on DVD, iTunes and other digital platforms 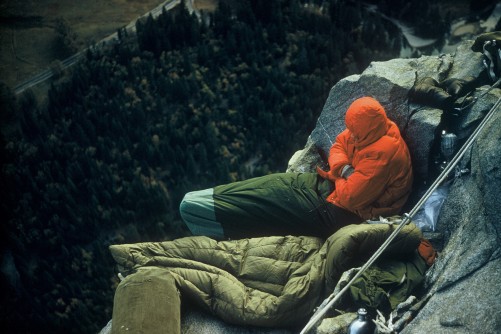 “Brave New Wild” features archival footage of groundbreaking climbs, such as the first ascent of El Capitan’s Dawn Wall, which made national headlines in 1970. The 28-day climb was completed by the prolific climber Warren Harding, who is profiled in the film. 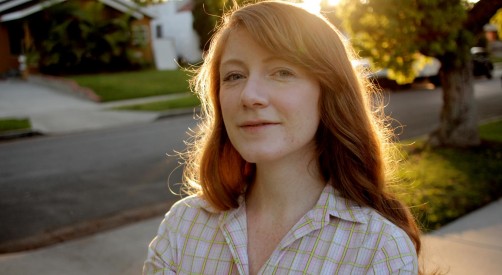 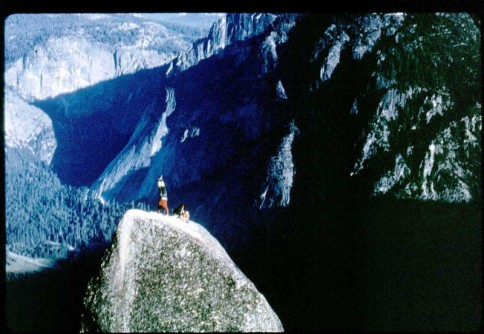 "Brave New Wild" chronicles adventurers broke social norms in post-World War II America to live nomadic lives in their quest to conquer the Tetons, outside Yellowstone National Park, and the great rock walls, such as Half Dome and El Capitan in Yosemite Valley.

Newswise — Why do people rock climb? It is a highly dangerous and difficult sport—and most definitely a non-conventional life pursuit. Independent filmmaker Oakley Anderson-Moore sets out to answer this question in her debut feature documentary, “Brave New Wild,” which is in the midst of a national theatrical tour and was recently made available for viewing on DVD as well as on iTunes and other digital platforms.

Anderson-Moore, who graduated from UC San Diego in 2007 and collaborated with several other UC San Diego alumni on the project, filmed a series of interviews of climbers from the early days of the climbing revolution. These adventurers broke social norms in post-World War II America to live nomadic lives in their quest to conquer the Tetons, outside Yellowstone National Park, and the great rock walls, such as Half Dome and El Capitan in Yosemite Valley. Their stories are weaved in with the personal story of Anderson-Moore’s father, Mark Moore, a UCLA grad who was volunteering for the Robert F. Kennedy presidential campaign when the senator was assassinated, an event that caused Moore to abandon what seemed a promising future to live a life on the road in pursuit of rocking climbing.

As the daughter of a climbing pioneer, Anderson-Moore grew up rock climbing. She took on project of “Brave New Wild, serving as director and editor of the film, after discovering something unusual while watching her father’s old hi8 tapes. Many of the vintage family films were shot in Yosemite Nation Park, but she noticed her father would often pan away from shots of her as a child to the majestic granite walls that surrounded the valley. The discovery of the footage eventually lead Anderson-Moore to travel throughout the U.S., coast-to-coast in 40 days, interviewing many legendary members of the climbing community to learn more about what lured them to the sport.

“I was really intrigued by climbers, especially the ones I focus on in the film from the early days, who are people who gave up their lives to climb rocks. Something the rest of the world wouldn’t understand,” said Anderson-Moore. “Why would you risk your life to climb a rock? There is no holy grail at the top, you're not making any money, and half the time you could get to the top a different way around the back.”

Her film looks at how the act of rock climbing evolved into a fanatical movement among the new middle class in post ­WW II America. Unlike aristocratic mountaineers of the past, who climbed mountains with caution and for national honor, climbing rocks grew into an American counterculture movement that embraced risk taking and individual self-expression.

“Brave New Wild” is in the midst of a national theatrical tour. It played in Los Angeles, Orange County and San Diego and will be shown in Austin, Texas on May 2nd and more cities, thereafter. For information on screenings and to get tickets, click here.

The film which, all-in-all, took Anderson-Moore eight years to create, was one of 10 accepted into the 2012 IFP Independent Documentary Lab.

In addition to interviews, “Brave New Wild” features archival footage of groundbreaking climbs, such as the first ascent of El Capitan’s Dawn Wall, which made national headlines in 1970. The 28-day climb was completed by the prolific climber Warren Harding, who is profiled in the film.

Anderson-Moore and her collaborators also helped bring the stories to life through animation. The combination of elements aimed to capture the eclectic nature of the people featured in the documentary.

Anderson-Moore’s interest in storytelling deepened when she enrolled at UC San Diego. “I started out as an undeclared major, but ended up getting a B.A. in both visual arts (film/video) and theatre arts because those departments just seemed to come alive to me. It was where creative things were happening,” she said. “I think fondly on what I learned from each department.”

During her time at UC San Diego, Anderson-Moore met many of her collaborators on “Brave New Wild,” which includes Reinhard, composer Mark Bertuldo (interdisciplinary computing and the arts,’03), director of photography Nicki Louie (visual arts, ’06) production assistant Corene Petlin (biochemistry, ‘06) and others.

“I met intelligent, creative people on campus, some of whom are my close friends and collaborators today,” said Anderson-Moore. She added, “I truly treasure the experience I had at UC San Diego, where I learned from professors such as JP Gorin, Babette Mangolte, and Isaac Artenstein that film wasn't just about entertainment; it was about cultural dialogue and an inherent projection of thought that humans could share with each other . . . UC San Diego helped propel me to want to make clever films that advance our understanding of each other.”

After graduating from UC San Diego, Anderson-Moore said she had two choices––go to film school or make a film. She chose the latter. While on her journey to make “Brave New Wild,” she came across nofilmschool.com, an online community where independent filmmakers learn from each other. As the site started growing, Anderson-Moore came onboard as a writer, where she shares her own musings on filmmaking as well as championing and giving a platform to other independent filmmakers. In addition, her position at nofilmschool.com has given Anderson-Moore the opportunity to interview directors such as Werner Herzog (“Grizzly Man,” “Rescue Dawn”) and Kat Candler (“Hellion”).

She recently moved from Los Angeles to Flagstaff, Ariz., where she is working on a narrative script about the Southwest.

“As an independent filmmaker, I'm interested in ideas and stories that go against the grain of what our society generally accepts, and challenges our notions of who we are,” said Anderson-Moore. “Film is a powerful thing; it is as close to human thought as any art form to date. It shouldn't be monopolized by a few wealthy studios that don't feel the need or don't understand the dissonant voices out there––like mine––trying to share a different version of the world and our reality.”