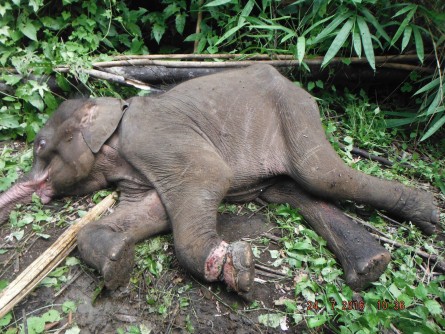 A very important article co-authored by WCS scientist Tony Lynam was published on January 20th's edition of Science about a crisis emerging in Asia from snaring, which is wiping out wildlife in unprecedented numbers. Other authors include Thomas N. E. Gray of Wildlife Alliance; Teak Seng of the World Wildlife Fund; William F. Laurance of James Cook University; Barney Long of Global Wildlife Conservation; Lorraine Scotson of the University of Minnesota; and William J. Ripple of Oregon State University. The article points out that use of homemade snares are largely driving unsustainable levels of commercial hunting in Southeast Asia to the point of extinction. The authors also make recommendations for how this issue might be managed to avoid “empty forests.”

Photo Caption: A variety of Asian wildlife are caught in snares including Asian elephants, primates, cats, and other mammal species.