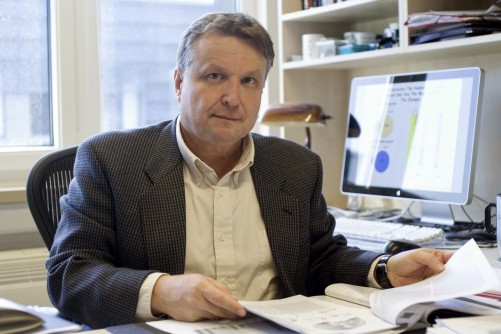 Newswise — Lake Nona, Fla., August 4, 2016 (embargoed until 12:00 P.M. EST) — Scientists at Sanford Burnham Prebys Medical Discovery Institute (SBP) have made a major advance in understanding how the cells of an organism, which all contain the same genetic information, come to be so diverse. A study published today in Molecular Cell shows that a protein called OCT4 narrows down the range of cell types that stem cells can become. The findings could impact efforts to produce specific types of cells for future therapies to treat a broad range of diseases, as well as aid the understanding of which cells are affected by drugs that influence cell specialization.

“We found that the stem cell-specific protein OCT4 primes certain genes that, when activated, cause the cell to differentiate, or become more specialized,” said Laszlo Nagy, M.D., Ph.D., professor and director of the Genomic Control of Metabolism Program and senior author of the study. “This priming customizes stem cells’ responses to signals that induce differentiation and makes the underlying genetic process more efficient.”

Differentiation mattersAs an organism—such as a human—develops from its simplest, earliest form into maturity, its cells transition from a highly flexible state—stem cells—to more specialized types that make up its tissues. Many labs are trying to recapitulate this process to generate specific types of cells that could be transplanted into patients to treat disease. For example, pancreatic beta cells could treat diabetes, and neurons that produce dopamine could treat Parkinson’s.

What OCT4 doesOCT4 is a transcription factor—a protein that regulates gene activity—that maintains stem cells’ ability to give rise to any tissue in the body. OCT4 works by sitting on DNA and recruiting factors that either help initiate or repress the reading of specific genes.

The new study shows that, at certain genes, OCT4 also collaborates with transcription factors that are activated by external signals, such as the retinoic acid (vitamin A) receptor (RAR) and beta-catenin, to turn on their respective genes. Vitamin A converts stem cells to neuronal precursors, and activation of beta-catenin by Wnt can either support pluripotency or promote non-neural differentiation, depending on what other signals are present. Recruitment of these factors ‘primes’ a subset of the genes that the signal-responsive factors can activate.

The big picture“Our findings suggest a general principle for how the same differentiation signal induces distinct transitions in various types of cells,” added Nagy. “Whereas in stem cells, OCT4 recruits the RAR to neuronal genes, in bone marrow cells, another transcription factor would recruit RAR to genes for the granulocyte program. Which factors determine the effects of differentiation signals in bone marrow cells—and other cell types—remains to be determined.”

Next steps“In a sense, we’ve found the code for stem cells that links the input—signals like vitamin A and Wnt—to the output—cell type,” said Nagy. “Now we plan to explore whether other transcription factors behave similarly to OCT4—that is, to find the code in more mature cell types.

“If other factors also have this dual function—both maintaining the current state and priming certain genes to respond to external signals—that would answer a key question in developmental biology and advance the field of stem cell research.”

About SBPSanford Burnham Prebys Medical Discovery Institute (SBP) is an independent nonprofit medical research organization that conducts world-class, collaborative, biological research and translates its discoveries for the benefit of patients. SBP focuses its research on cancer, immunity, neurodegeneration, metabolic disorders and rare children’s diseases. The Institute invests in talent, technology and partnerships to accelerate the translation of laboratory discoveries that will have the greatest impact on patients. Recognized for its world-class NCI-designated Cancer Center and the Conrad Prebys Center for Chemical Genomics, SBP employs about 1,100 scientists and staff in San Diego (La Jolla), Calif., and Orlando (Lake Nona), Fla. For more information, visit us at http://www.SBPdiscovery.org or on Facebook at http://www.facebook.com/SBPdiscovery and on Twitter @SBPdiscovery.