17-Jan-2014 9:00 AM EST, by National Institute of Biomedical Imaging and Bioengineering
favorite_border 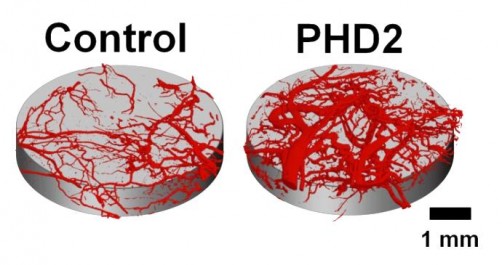 Newswise — A team of researchers led by an NIBIB grantee at Vanderbilt University has created a biodegradable scaffold that enables sustained, local delivery of gene-silencing factors called siRNA to promote tissue regeneration. The team recently used the scaffold to successfully deliver siRNA to mice in order to locally silence a gene normally responsible for inhibiting blood vessel formation.

The technology could provide a new approach for the treatment of chronic wounds, which afflict over six million patients in the U.S. and cost an estimated $25 billion dollars per year to treat.[1] Because diabetic patients are at increased risk for developing chronic wounds, these numbers are expected to rise as diabetes rates climb.

Blood vessels deliver important factors to wounds, such as oxygen, micronutrients, and growth factors. Studies suggest that increasing angiogenesis –the formation of new blood vessels— may help to heal wounds.

One way to enhance the development of blood vessels is through the delivery of growth factors directly to wounds; yet multiple growth factors are needed to produce mature blood vessels, and their concentration as well as the timing of their application must be carefully orchestrated to facilitate proper growth.

An alternative approach involves delivering siRNA—short, double-stranded RNA molecules designed to silence a gene of interest—to cells in order to influence genes that induce the formation of new blood vessels. While this method also ultimately results in an increase in pro-angiogenic growth factors, this approach leverages natural mechanisms in the cell that produce a symphony of related factors, initiating a robust “growth program” that induces formation of mature, stable vasculature.

Yet, delivering a sufficient amount of siRNA to cells is a notoriously difficult task, one that has prevented this therapy from being adopted clinically for wound healing.

“Many biologic drugs such as siRNA exhibit transient activity,” said Craig Duvall, Ph.D., Assistant Professor of Biomedical Engineering at Vanderbilt University, who led the study. “This is especially true in sites where cells are rapidly dividing, as is the case in wounds. Every time those cells divide, the siRNA effectively gets diluted out. So, with a single dose of siRNA, you may achieve activity for only a few days.”

A new technology for siRNA delivery

In a manuscript published online in December 2013 in Advanced Materials, Duvall and colleagues reported the use of a novel tissue scaffold that can deliver siRNA to nearby cells over a period of several weeks. Using an siRNA dose 10-100-fold lower than previous studies, the research team efficiently silenced the expression of PHD2—a protein that normally inhibits blood vessel formation— locally within a biodegradable tissue scaffold. At 33 days post-implant, the scaffolds that delivered PHD2 siRNA had a three-fold increase in the volume of local blood vessels.

To achieve sustained delivery, the researchers first packaged siRNA into nanoparticles, which protect siRNA from being degraded by enzymes found in the extracellular environment. They then combined these nanoparticles with varying amounts of a substance called trehalose. This nanoparticle-trehalose combination was then embedded into a biodegradable tissue scaffold, which they implanted under the skin of a mouse. Trehalose acts as a porogen, meaning it creates pores in the tissue scaffold. As a result, the rate at which nanoparticles are released from the scaffold is directly influenced by the amount of trehalose added. Based on the quantity of trehalose, the system can be tuned to release the nanoparticles to the surrounding cells immediately or over a period of several weeks.

Duvall says their scaffold provides the unique ability to adapt siRNA treatment to fit a particular clinical problem. “Depending on the target gene, and its time course of expression during the wound healing process, you may want to have a fast, short-lived silencing effect, or you may want to have a long-term, sustained silencing effect. For example, in a hard to close wound, you may want to deliver siRNA for a month, or even longer. With this scaffold, we can make that adjustment by simply tuning the quantity of trehalose.”

Christine A. Kelley, Ph.D., a Division Director at the NIBIB, praised the development saying, “This innovative approach and effective method for local siRNA delivery could have wide applications including diabetic wound healing, a significant and growing problem across the globe.”

Duvall and his team are now planning to test the efficacy of their scaffold in closing wounds of diabetic rats. In the future, they also plan to explore siRNA treatments targeting different genes for both wound healing and other types of conditions.

“What we’ve developed is a platform technology,” said Duvall. “One of the nice things about siRNA is that you can design it with high specificity against any target you want. That opens up a whole universe of opportunities in terms of therapeutic intervention both for wounds and for other types of pathological and tissue regenerative applications.”