Study reveals that E-cadherin, a molecule that allows cells to stick to each other, promotes metastasis in the most common type of breast cancer 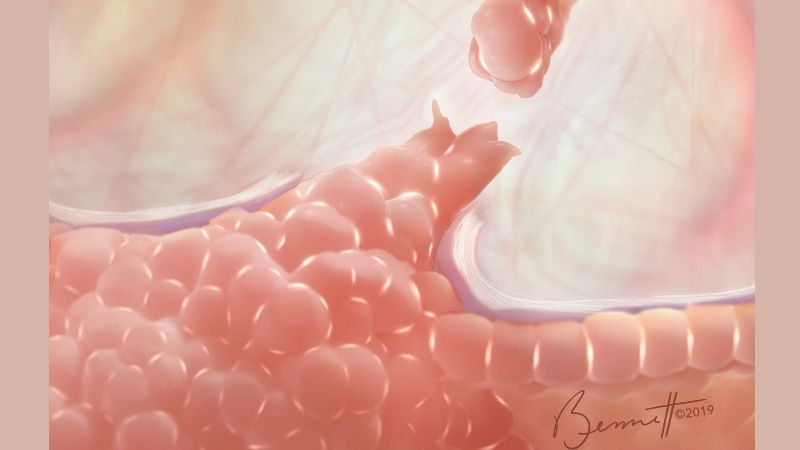 A cancer cell cluster escapes from a breast tumor. The E-cadherin mediated connections between the cells in the cluster (white bars) promote cancer cell survival during metastatic spread.

Newswise — Researchers at the Johns Hopkins Kimmel Cancer Center discovered that a cell adhesion protein, E-cadherin, allows breast cancer cells to survive as they travel through the body and form new tumors, a process termed metastasis. Their conclusions, obtained through laboratory experiments and in mouse models, help explain how metastasis works in the most common form of breast cancer, invasive ductal carcinoma. E-cadherin appears to limit molecular stresses within the cancer cells and allow them to survive long enough to form new tumors. The finding, published online in the Sept. 4 issue of Nature, could lead to new ways to prevent breast cancers from recurring in patients.

“Previously, researchers thought that it was essential for cancer cells to lose E-cadherin in order to metastasize,” says study leader Andrew Ewald, Ph.D., professor of cell biology and co-director of the Cancer Invasion and Metastasis Program at Johns Hopkins Kimmel Cancer Center. “This was difficult to reconcile with the fact that breast tumors in patients typically continue to express E-cadherin. Our study was designed to test the role of this protein during metastasis.”

The overwhelming majority of breast and other cancer deaths are caused by metastasis; consequently, preventing metastasis is a crucial cancer research goal, he says.

Scientifically, metastasis is characterized by many separate stages, including when cancer cells invade healthy breast tissue, escape the primary tumor, enter and survive within blood vessels, exit into new organs, then survive and seed a new tumor in a distant organ, such as the lungs.

Cancer cells break free from the primary tumor early in metastasis and much research has focused on how cancer cells stick together at the molecular level, through the protein E-cadherin. In some cancers, such as a form of breast cancer known as invasive lobular carcinoma, genetic mutations that eliminate E-cadherin appear to be pivotal for metastasis to occur.

However, other types of cancer — such as invasive ductal carcinoma, the most common form of breast cancer, responsible for more than 80% of all breast cancer diagnoses — retain this protein or even overexpress it, a discrepancy that scientists couldn’t explain.

To investigate this discrepancy, Ewald and his colleagues tested the role of E-cadherin in three experimental models of invasive ductal carcinoma that represent common subtypes of human breast cancer: luminal, basal, and triple negative breast cancer. These subtypes have different patterns of gene expression and different average patient outcomes.

However, losing E-cadherin sabotaged every other biological stage of metastasis in all three breast cancer models, in both lab experiments and animal models. Cells without E-cadherin got lost while migrating and died in large numbers at every step after leaving the primary tumor. The few that did manage to migrate and survive didn’t proliferate in new organs and rarely formed new tumors, Ewald reports.

“The good news,” he says, “is that our study reveals that the process of metastasis, even in ideal laboratory settings, appears to be exceedingly inefficient.” Research suggests that about 99% of cells that leave primary tumors die and never form new tumors.

Other researchers who participated in this study include Veena Padmanaban, Yasir Suhail and Joel Bader from Johns Hopkins, and Ilona Krol, Barbara Szczerba and Nicola Aceto of the University of Basel and University Hospital Basel.