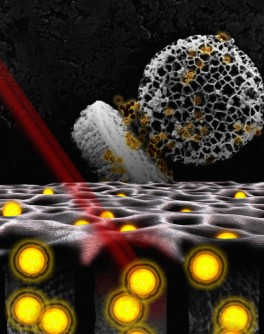 This false color image shows the embedding of hollow gold particles inside silicon wafers. The gold particles heat up quickly when harmless infrared radiation is shone upon them, causing nearby tissue (in this case, breast cancer cells) to die.

Newswise — HOUSTON -- (Jan. 17, 2012) -- By shining infrared light on specially designed, gold-filled silicon wafers, scientists at The Methodist Hospital Research Institute have successfully targeted and burned breast cancer cells. If the technology is shown to work in human clinical trials, it could provide patients a non-invasive alternative to surgical ablation, and could be used in conjunction with traditional cancer treatments, such as chemotherapy, to make those treatments more effective.

The research is presented in the first issue of the new Advanced Healthcare Materials, a Wiley journal.

"Hollow gold nanoparticles can generate heat if they are hit with a near-infrared laser," said Research Institute Assistant Member Haifa Shen, M.D., Ph.D., the report's lead author. "Multiple investigators have tried to use gold nanoparticles for cancer treatment, but the efficiency has not been very good -- they'd need a lot of gold nanoparticles to treat a tumor."

Instead, Shen and his colleagues turned to a technology developed by the study's principal investigator, Mauro Ferrari, Ph.D., The Methodist Hospital Research Institute (TMHRI) president and CEO, to amplify the gold particles' response to infrared light.

"We developed a system based on Dr. Ferrari's multi-stage vector technology platform to treat cancers with heat," Shen said. "We found that heat generation was much more efficient when we loaded gold nanoparticles into porous silicon, the carrier of the multistage vectors."

Shen and his team found that in the presence of 808 nanometer light, the gold-filled silicon particles heated up a surrounding solution by about 20 deg C (35 deg F) in seven minutes. Water particles immediately around the particles were presumed to have been hotter.

And experiments showed that tumor cell growth was lowest in the presence of gold-loaded silicon nanoparticles in three types of breast cancer cells -- MDA-MB-231 and SK-BR-3 (human), and 4T1 (mouse).

The silicon wafers the scientists are using are the result of painstaking work by Ferrari's group to design nanoparticles that preferentially bind to breast cancer cells, rather than, say, healthy liver or immune system cells. The shape and size of the silicon particles, as well as their surface chemistry, are all crucial, Ferrari's group found. Too big or the wrong shape, and the silicon nanoparticles bind to multiple cell types -- or none at all. Polyamine structures are attached to the wafers to improve their attraction to cancer cell surfaces and their solubility. The wafers are about one micrometer in diameter (one-thousandth of a millimeter). By contrast, the typical breast cancer cell is about 10 to 12 times that size.

Shen says the gold particles, too, must be designed with a specific use in mind, albeit for indirect reasons.

"The hollow gold particles we load into the porous silicon must be the right size and have the correct-sized space inside them to interact with the infrared light we are using," he said. "But the wavelength of infrared we use will have to change depending on where the tumor is. If it's close to the skin, we can use shorter wavelengths. Deeper inside the body, we have to use longer wavelengths of infrared to penetrate the tissue. The hollow space of the gold particles must be modified in response to that."

Both silicon and gold have low toxicity profiles in the human body, and are popular materials in current investigations using medical nanotechnology. Silicon is steadily broken down by physiological processes into an acid that is removed through the kidneys. And gold is chemically inert.

And infrared -- the type of light used by TV remote controls and garage door openers -- is also far less dangerous than light with shorter wavelengths, such as ultraviolet, which can cause DNA damage, and x-rays.

Understanding why hollow gold particles heat up in the presence of certain wavelengths of infrared is complex enough to require some background in physical chemistry. But the upshot is that the energy of certain wavelengths of light is largely absorbed by the particles, and that energy is released as vibrational (heat) energy. Absorption is influenced both by the diameter of the space within the hollow gold particles, and by the properties of gold itself.

Shen says he'd like to know whether the silicon-gold nanotechnology can be used to wipe out whole tumors, rather than just cancerous cells.

"We are planning pre-clinical studies to study the technology's impact on whole tissues, breast cancer cells and possibly pancreatic cancer cells," Shen said. "We would also like to see whether this approach makes chemotherapy more effective, meaning you could use less drugs to achieve the same degree of success in treating tumors. These investigations are next."

Coauthors of the Advanced Healthcare Materials paper were Jian You, whose contributions were equal to Shen's, Guodong Zhang, Arturas Ziemys, Qingpo Li, Litao Bai, Xiaoyong Deng, Donald R. Erm, Xuewu Liu, Chun Li, and Mauro Ferrari. The research was supported with grants to Ferrari from the Department of Defense and the National Institutes of Health.