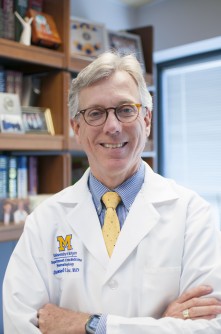 Newswise — ANN ARBOR, Michigan — Even 20 years after a diagnosis, women with a type of breast cancer fueled by estrogen still face a substantial risk of cancer returning or spreading, according to a new analysis from an international team of investigators published in the New England Journal of Medicine.

Standard treatment for estrogen receptor-positive, or ER-positive, breast cancer includes five years of the endocrine-based treatments tamoxifen or aromatase inhibitors, both of which are a taken daily as a pill.

Researchers from the Early Breast Cancer Trialists’ Collaborative Group analyzed data from 88 clinical trials involving 62,923 women with ER-positive breast cancer. The patients all received endocrine therapy for five years and were free of cancer when they stopped therapy.

Over the next 15 years, however, a steady number of these women saw their cancer spread throughout the body, as late as 20 years after the initial diagnosis.

“Even though these women remained free of recurrence in the first five years, the risk of having their cancer recur elsewhere (for example in the bone, liver or lung) from years five to 20 remained constant,” says senior study author Daniel F. Hayes, M.D., Stuart B. Padnos Professor of Breast Cancer Research at the University of Michigan Comprehensive Cancer Center.

The risk of recurrence was directly tied to the original cancer’s size and characteristics, and to the number of lymph nodes that were cancerous.

Among patients who were recurrence-free when they stopped taking endocrine therapy after five years, the highest risk of recurrence was for those with originally large tumors and cancer that had spread to four or more lymph nodes. These women had a 40 percent risk of a distant cancer recurrence over the next 15 years. Women with small, low-grade cancers and no spread to the lymph nodes had a much lower 10 percent risk of cancer spreading distantly during the following 15 years.

“It is remarkable that breast cancer can remain dormant for so long and then spread many years later with this risk remaining the same year after year and still strongly related to the size of the original cancer and whether it had spread to the nodes,” says Hongchao Pan, Ph.D., M.Sc., lead author from the University of Oxford.

Doctors have long known that five years of tamoxifen reduces recurrence by approximately half during treatment, and by nearly a third over the next five years. Aromatase inhibitors, which work only in post-menopausal women, are even more effective than tamoxifen at reducing recurrence and death from breast cancer.

Newer studies have suggested an additional five years of endocrine therapy is even more effective, sparking the question of whether every woman should continue on this therapy for 10 years.

Life-threatening side effects are rare with these therapies, but they can impact patients’ quality of life. Side effects mimic menopausal symptoms, such as hot flashes or vaginal dryness. Aromatase inhibitors can cause osteoporosis, joint pain or carpal tunnel syndrome. Studies suggest that some patients choose to stop taking endocrine therapy because of these side effects.

“As we look at extending endocrine therapy for 10 years, we wanted to determine whether there were certain subgroups of women whose risk of recurrence was so low they might not need to continue endocrine therapy after five years,” Hayes says.

The researchers subdivided patients to analyze those with the best prognosis – small tumors with less-aggressive properties and no positive lymph nodes. Even these women had appreciable recurrence rates between years five and 20, at about 1 percent per year, or 10 percent over the course of 15 years.

However, co-lead author Richard Gray, Ph.D., M.Phil., from the University of Oxford offers a caveat.

“To assess 20-year risks, we had to study women who received their breast cancer diagnosis many years ago. We know that treatments have improved since then, so recurrence rates will be somewhat lower for women who were diagnosed more recently,” he says.

The data suggest that women with ER-positive breast cancer should at least consider taking anti-estrogen therapy beyond five years, the authors say.

“These data can be used by patients and their health care providers as they consider whether to continue taking anti-estrogen therapy beyond five years, weighed against side effects and toxicity of the therapies,” Hayes says.