Nonprofit Group Educates Women on Dense Breast Risks, Urging Them to ‘Get Smart about Being Dense’

Newswise — DEER PARK, N.Y. -- Recognizing that both women and their doctors are often confused after a mammogram reveals the woman has dense breasts, a nonprofit organization has launched a major new educational website. The site, www.DenseBreast-info.org, addresses questions women and their healthcare providers often have about breast density – helping them to "Get Smart about Being Dense."

Breast density notification laws have now been enacted in 22 states, encompassing 65% of American women, with the newest such law just approved in North Dakota. The laws require that some level of information about breast density be provided to women in the letter they receive after their mammogram.

”Receiving a notification about dense breasts can leave a woman and her doctor with more questions than answers,” said DenseBreast-info’s executive director, JoAnn Pushkin, whose own experience with breast density led her to push successfully for introduction of New York’s Breast Density Inform law. “As states passed laws about dense breast notification, it became clear that this is just the first step in an education process. Our nonprofit coalition developed this comprehensive new website to provide a single source of further education.”

The chief scientific advisor for the site, which has been extensively sourced and reviewed by medical experts, is Wendie Berg, M.D., Ph.D., a noted radiologist at Magee-Womens Hospital of UPMC, University of PittsburghSchool of Medicine. Dr. Berg is also a contributor to the JoanLunden.com website, writing on breast density issues.

“We are hoping that through this website, women will understand that if they have dense breasts, additional screening beyond a mammogram may be recommended,” said Berg, who has been the principal investigator on major studies in breast imaging. “We also want them to know that in most cases where extra testing is done, women are found not to have breast cancer. The website is meant to provide women and their care providers with the tools they need to choose the most appropriate screening, based on a woman’s breast density and other risk factors.”

In an ironic twist of fate, Berg herself recently joined the ranks of breast cancer survivors. Because she has dense breasts, her early-stage breast cancer was not detected on either her annual mammograms or by breast tomosynthesis. Her family history and other risk factors prompted Berg to ask her doctor for a screening breast MRI which found her breast cancer.

“Being a researcher and a radiologist gives you one perspective on dense breasts and being a woman with dense breasts gives you another,” said Berg. “My experience with breast cancer gave me the full picture and compelled me to make women’s education about breast density a top priority.”

The nonprofit organization’s website was developed by Pushkin, Berg, and Cindy Henke-Sarmento, a woman’s health entrepreneur and mammography technologist who led the initiative to introduce breast-density legislation in Colorado. To view the site, visit www.DenseBreast-info.org. 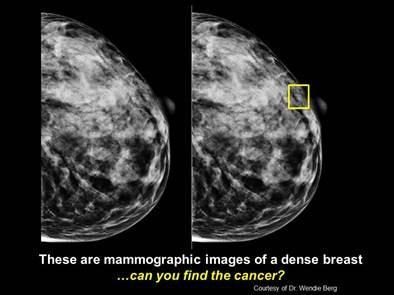 Caption: These are mammographic images of a dense breast. Can you find the cancer? 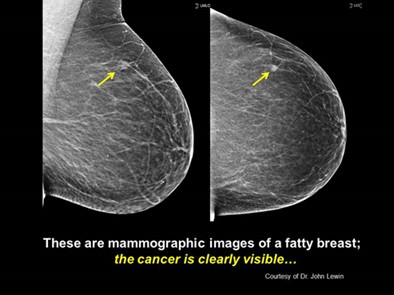 Caption: These are mammographic images of a fatty breast. The cancer is clearly visible.