Breast Milk “Bartending”: There’s an App for That 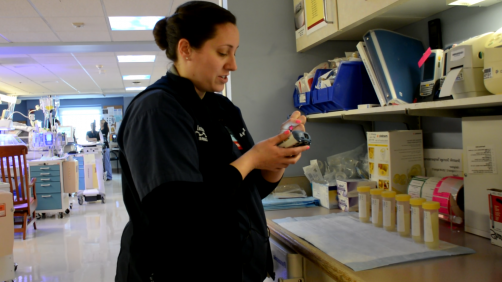 Kelly Convery, BSN, RN, IBCLC, ICN demonstrates the tedious logging system that has been simplified and streamlined by Keriton.

Newswise — Nurses in neonatal intensive care units (NICU) spend close to 13,000 hours every year, across roughly 1,100 NICUs, managing breast milk for the nearly 500,000 babies across the United States that require special and often critical care in the first months of their lives. That’s 13,000 hours (the annual equivalent of six full-time nurses) spent on just what these nurses call “bartending” – not feeding, just monitoring, labeling, printing, and logging infant-specific nutritional management. And for moms of these fragile patients, keeping a full inventory of breast milk can add frustration and stress to an already trying time. What the arduous process involved with manual breast milk management amounts to for both new parents and care providers is a significant amount of time that could otherwise be spent at the bedside of these often critically ill patients.
Enter Keriton, a new breast milk management system designed for nurses and new moms, by nurses and new moms, that the Hospital of the University of Pennsylvania’s Intensive Care Nursery (ICN) began testing last month. Keriton is a 4-in-1 app that allows for easy tracking of breast milk inventories, helps moms and care providers stay in touch (via text and photos), and may even increase milk production. But, unlike other apps that are available to only moms or to only nurses, Keriton is the first integrated system that operates on a HIPAA-compliant and secure server, allowing for “process automation” – meaning, moms use the app to log and track how much and when they are pumping, and the information is automatically synced with the app on the hospital’s end, allowing providers to smartly track inventory, auto-generate lactation analytics for each mom and provide a means to engage with the patient.

“Logging breast milk manually is incredibly time-sensitive and prone to errors,” said Kelly Convery, BSN, RN, IBCLC, ICN Lactation Consultant at HUP, noting that each bottle requires 16-20 manual validations (including verifying the baby’s and mother’s identification, updating expiration dates – which changes when the bottle is moved from the freezer to the fridge – inventory, etc.). “For moms, having to manually keep track of when they last pumped, which side they pumped from and how much they could produce, is incredibly stressful in a time when they should be able to focus on the well-being of their child.”

According to Convery, moms can bring in up to 16 bottles of milk per day. With most ICN nurses caring for three ICN babies at any given time, the time it takes to inventory and track breast milk really starts to add up. But, research has shown that babies in the NICU are discharged faster and have better health outcomes – including fewer respiratory and GI tract infections – both in the short and long term when they are fed with their mother’s breast milk, making the need for a better management system paramount.

Keriton is the brainchild of Vidur Bhatnagar, who was working toward a master’s in Robotics in 2015, and had a nephew in 2011, who was born three weeks prematurely. With fluid in his lungs, doctors decided to admit Bhatnagar’s nephew, but discharged his sister, the baby’s mother.

“It just stuck with me that my sister was crying for three days and was not able to feed her child,” Bhatnagar told MedCity News. “Lactation is natural, but pumping is highly unnatural, and when you’re already in a stressful situation, remembering when you last pumped, or which side, or how long you pumped for is not always easy or a priority.”
In January 2016, Bhatnagar’s presentation of the Keriton prototype took second place at the PennApps 2016 competition. Two months later, with support from Penn Medicine and Wharton, Vidur had raised over $100,000 for development of the app, and spent the next six months building and testing the platform in partnership with the HUP NICU. Now in its pilot testing phase, final tweaks and adjustments are being made by the app’s “super users” – including the ICN nurses and moms, who Bhatnagar says have provided valuable feedback that’s led to several adjustments, and alert the team when something isn’t working properly. The company has now raised over a million dollars from angel investors, VCs and Penn Medicine.
Keriton now includes four apps in one:

Convey and Carpenter have both seen dramatic changes in pumping volumes with Keriton, a change they suspect is a result of the engagement Keriton provides by allowing moms to connect with nurses, see their babies, and receive alerts about low inventory, or reminders when it’s time to pump.

Vincent now weighs over 7 pounds and was able to go home with his mom just days ago. Though the past three months were especially trying, Poles says it helped to be able to receive pictures of Vincent and be involved in his care even when she couldn’t be by his side. Now at home, Poles is able to continue using the app to track her pumping volumes and log Vincent’s milk.