What bright nighttime light does to your preschooler

How light at night keeps your preschooler wired (b-roll) 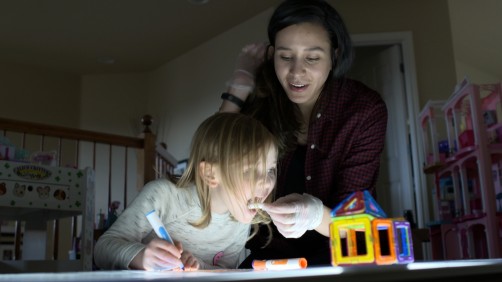 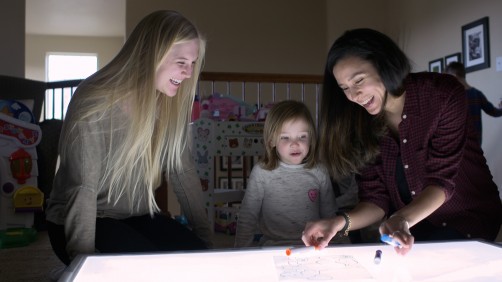 Newswise — Exposing preschoolers to an hour of bright light before bedtime almost completely shuts down their production of the sleep-promoting hormone melatonin and keeps it suppressed for at least 50 minutes after lights out, according to new University of Colorado Boulder research.

The study, published today in the journal Physiological Reports, is the first to assess the hormonal impact nighttime light exposure can have on young children.

The study comes at a time when use of electronics is rapidly expanding among this age group and adds to a growing body of evidence suggesting that–because of structural differences in their eyes–children may be more vulnerable to the impact light has on sleep and the body clock.

"Although the effects of light are well studied in adults, virtually nothing is known about how evening light exposure affects the physiology, health and development of preschool-aged children," said lead author Lameese Akacem, a CU Boulder instructor and researcher in the Sleep and Development Lab. "In this study we found that these kids were extremely sensitive to light."

For the study, the researchers enrolled 10 healthy children ages 3 to 5 years in a seven-day protocol. On days one through five, the children followed a strict bedtime schedule to normalize their body clocks and settle into a pattern in which their melatonin levels began to go up at about the same time each evening.

On day six, Akacem's team came into the children's homes and created a dim-light environment, covering windows with black plastic and swapping out existing lights with low-wattage bulbs. This ensured that all the children were exposed to the same amount of light–which can influence melatonin timing and levels–before samples were taken.

That afternoon, the researchers took periodic saliva samples to assess melatonin levels at various times. The following evening, after spending the day in what they playfully referred to as "the cave," the children were invited to color or play with magnetic tiles on top of a light table emitting 1,000 lux of light (about the brightness of a bright room) for one hour.

Then the researchers took samples again, comparing them to those taken the night before.

Melatonin levels were 88 percent lower after bright light exposure. Levels remained suppressed at least 50 minutes after the light was shut off.

Direct comparisons between this study and studies in adults must be made with caution because of differing research protocols, the researchers stress. However, they note that in one study, a one-hour light stimulus of 10,000 lux (10 times that of the current study) suppressed melatonin by only 39 percent in adults.

"Light is our brain clock's primary timekeeper," explains senior author Monique LeBourgeois, an associate professor in the Department of Integrative Physiology. "We know younger individuals have larger pupils, and their lenses are more transparent. This heightened sensitivity to light may make them even more susceptible to dysregulation of sleep and the circadian clock."

She explains that when light hits the retina in the eye in the evening, it produces a cascade of signals to the circadian system to suppress melatonin and push back the body's entrance into its "biological night." For preschoolers, this may not only lead to trouble falling asleep one night, but to chronic problems feeling sleepy at bedtime.

"The effects of light at night exposure can definitely go beyond sleep," Akacem said.

The study sample size was small and it used only one intensity of light, 1,000 lux, which is far greater than the intensity of a typical handheld electronic device, she notes.

With a new $2.4 million grant from the National Institutes of Health, LeBourgeois recently launched a study in which she will expose 90 children to light of different intensities to determine how much it takes to impact the circadian clock.

"The preschool years are a very sensitive time of development during which use of digital media is growing more and more pervasive," Le Bourgeois said. Use of electronic media among young children has tripled since 2011. "We hope this research can help parents and clinicians make informed decisions on children's light exposure."

The takeaway for parents today: Dim the lights in the hours before bedtime.

Caption: What bright nighttime light does to your preschooler

Caption: How light at night keeps your preschooler wired (b-roll)