Newswise — MANHATTAN, KANSAS — It started with a purple book. It continues with a purple connection to the Bipartisan Policy Center.

From agriculture to animal health, Kansas State University has been leading the national discussion in bio/agrodefense since it published the "Homeland Defense Food Safety, Security and Emergency Preparedness Program" — also known as "The Big Purple Book" — in 1999.

Recently, the university co-hosted an event at the Bipartisan Policy Center, a Washington-based nonprofit organization that combines the best ideas from both parties to address the key challenges facing the nation. The panel discussion highlighted the threat of bio/agroterrorism and the importance of including agriculture in biosecurity and biodefense.

The panel discussed the 2015 Blue Ribbon Panel on Biodefense report, which noted the U.S. is still highly vulnerable to biological agents, including biological weapons and natural disease threats to agriculture.

"I think these are issues that deserve the highest attention and the most critical prioritization as we look at public policy in the context of national security," said Daschle, as he described his firsthand experience with bioterrorism during the 2001 anthrax attacks. "I don't think anyone disputes the importance of the issue, but what I don't think has happened is that we have given it the kind of attention that it so justly deserves."

Rogers, former chairman of the House Permanent Select Committee on Intelligence, described how terrorists have become much more sophisticated and he highlighted the discovery of a laptop in Syria with a documented strategy for using biological warfare.

"It will happen," Rogers said. "It is a matter now of are we prepared to deal with it, and have we set ourselves up for being successful in either beating it, disrupting it or reacting to it. And I think today, probably not."

Myers said that when U.S. troops went into an Afghanistan cave in 2002, they found an al-Qaida list of planned bioweapons pathogens, including six human pathogens, six livestock and poultry pathogens, and four plant pathogens.

Crops are the under-addressed aspect of bioweapons, Myers said. A major outbreak of food animal or food crop diseases would do more than create an economic impact; it also would create fear among people and lead to distrust of the government – exactly what terrorists want.

"Food crop diseases are almost the perfect weapon because they involve relatively soft targets," Myers said. "There is no danger to the perpetrator because they're not going to be injured by what they are doing. It will take some time to discover it, especially with our current surveillance methods, which are inadequate. Plus, it will be very difficult to have attribution."

Tammy Beckham, dean of the College of Veterinary Medicine, participated in a second panel at the Bipartisan Policy Center. She has spent a majority of her career in protecting food systems and discussed how to better use resources to combat bioterrorism.

"In the U.S., we have a very robust agricultural production system and we are thankful for that," Beckham said. "The very things that make it robust also make it susceptible to disease introduction."

Beckham noted critical gaps in the U.S., such as inadequate countermeasures, undeveloped diagnostic tests and a lack of a comprehensive biodefense program. She said it is important to incentivize people and organizations to improve biosecurity and address One Health — which involves connections between human, animal and environmental health.

The university will continue encouraging executive-level involvement in addressing agricultural concerns as well as collaboration between researchers from different universities and organizations. 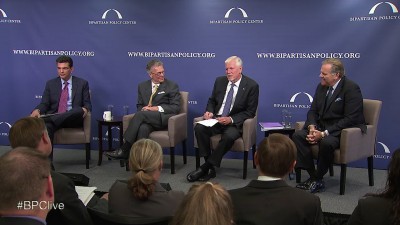 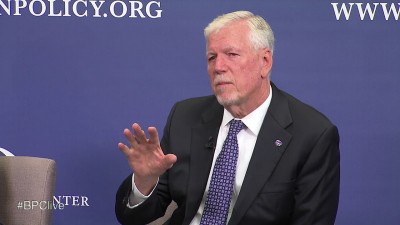 Caption: Gen. Richard Myers, interim president of Kansas State University, participates in a Bipartisan Policy Center panel discussion and describes the importance of including agriculture and animal health in biodefense.