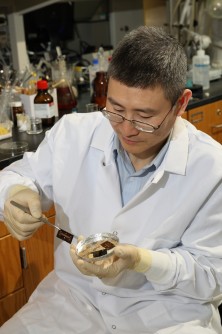 The thin-film material in assistant professor Cheng Zhang’s hands may be the key to making fiber-optic components for computers and other electronic devices. 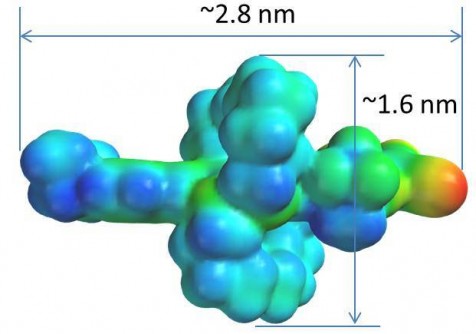 The ring-protected chromophore in this computer-simulated image is about 3 nanometers long—barely visible under the best electronic microscope.

Newswise — Fiber optics increased the speed and quantity of information that can be transmitted through the Internet by transforming electrical signals into pulsating light. The same can be done within laptops and other devices by using organic materials containing chromophore as an active compound, according to South Dakota State University materials chemist Cheng Zhang. Components made from this organic material can provide a larger bandwidth and draw less power. Zhang began working on electro-optical chromophores while earning his doctorate at the University of Southern California. In 2000, he and chemistry professor Larry Dalton developed the first electro-optical chromophore CLD1. The ‘C’ in the name stands for Cheng, while the LD is for Larry Dalton, he explained. The material was patented by Pacific Wave Communications, LLC, and sold by Sigma Aldrich.

Zhang has continued his work on chromophore since coming to SDSU in 2011 as an assistant professor in the chemistry and biochemistry department through support from the South Dakota Board of Regents.

Microscopic materialTo create the material, chromophore—an organic compound that has color—is suspended in a soft yet tough material called a polymer, according to Zhang. A coating of this material is then typically placed on a glass or silicon substrate, much like making solar panels, and then used to make electro-optical devices, he explained. Using a polymer makes the resulting device easier to integrate with electronic circuitry.

The bipolar chromophores Zhang is developing are only 3 nanometers long--barely visible under the best electronic microscope. “The diameter of a human hair is about 20,000 times the length of a bi-polar chromophore,” he noted.

Insulating ringsThese bi-polar chromophores act like magnets. When the tiny rods get too close together, they flip and stick together, Zhang explained. An electric field is applied to align the poles in the same direction; however, the more chromophores that are loaded into the material, the more difficult this becomes. “This fundamental problem limits the concentration of chromophore that can be loaded into the polymer,” Zhang said.

His research work seeks to solve this problem by creating a protective ring around a portion of each rod to keep them apart. This may “prevent the formation of tight aggregates even at the highest concentration,” Zhang said. He demonstrated this on the first ring-protected chromophore, PCR1, and is applying the strategy to current state-of-the-art chromophores. Chromophore bleachingWhen more rods are packed into the material, a new problem has emerged, according to Zhang. The material becomes too conductive, so when the current is applied to align the dipole, the chromophores burn out and die.

To solve the new problem, Zhang has added more insulating rings. If this effort is successful, the resulting material will have a higher electro-optic activity level, which will improve the material’s performance. According to the industry standard, electro-optical materials should be able to withstand 185 degrees Fahrenheit for 2,000 hours while maintaining at least 90 percent of the initial activity. Designing this electro-optic material involves a trade-off between its thermal stability and electro-optic activity. “If you improve one property, the other property gets sacrificed,” he said, “but we have to come up with a novel idea to minimize the trade-off.” 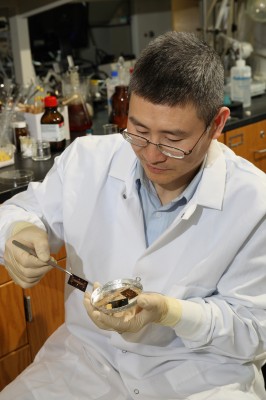 Caption: The thin-film material in assistant professor Cheng Zhang’s hands may be the key to making fiber-optic components for computers and other electronic devices. 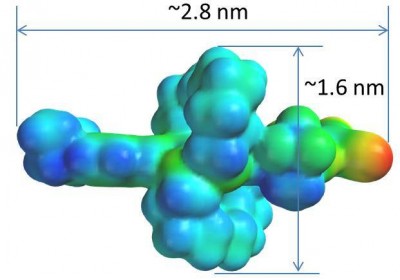 Caption: The ring-protected chromophore in this computer-simulated image is about 3 nanometers long—barely visible under the best electronic microscope.