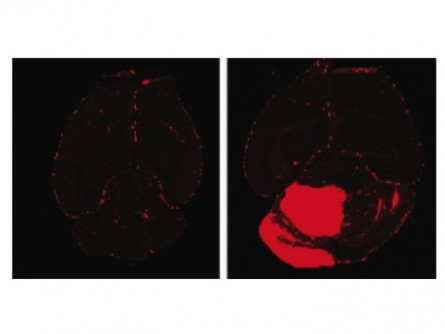 Newswise — On a clear evening in Seattle last September, a hundred people gathered silently in the courtyard of Fred Hutchinson Cancer Research Center. The usually talkative group had just watched “Bringing Light,” a 3-minute documentary about a new drug that could transform the field of cancer surgery.

In the film, the drug’s creator, pediatric oncologist Dr. Jim Olson, visits with a boy recovering from brain surgery. The child, a lanky 7-year-old named Keaton, teeters toward Olson in lurching steps. Surgery saved Keaton’s life, but because surgeons had to harm good tissue to carve out the bad, the operation also hurt his ability to walk, talk, and eat. Even partial recovery will be a battle.

One day, however, patients like Keaton will face a brighter future. At least, that’s what Olson and his research team hope. They’re working to equip operating rooms with the “Tumor Paint” imaging agent, an injectable drug that sticks to cancer cells and lights them up — letting surgeons more easily see what they’re slicing. It could help thousands of children escape permanent damage common during brain surgery.

At the film’s screening, the idea moved many in the audience to tears. Everyone watching had lived a version of Keaton’s story: They’re all relatives of Olson’s patients.

“I’d been through the treatment, survival, and sometimes deaths of their children over the past 20 years,” Olson said. “So being with those folks in that room that night, seeing that film, was one of the most emotional moments of my life.”

The night was also emotional for Heather Franklin, CEO of Blaze Bioscience, the company shepherding Tumor Paint technology into clinical trials. After the film, Olson remembered, “She put her hand over her heart and said, ‘We have got to make this work.’”

In the next few years, they just might do it. Blaze Bioscience plans to launch the first human trials in 2013. Tumor Paint technology still has a long way to go before it’s used in patients, but Olson is looking ahead to a time when brain surgery isn’t so devastating — a time when kids like Keaton can lead normal lives.

Dr. Olson’s studies are sponsored, in part, by the NCI’s SBIR/STTR programs. Olson talked with the NCI’s Meghan Rosen to answer a few questions about the Tumor Paint agent. “Bringing Light,” the film about the drug, is currently a finalist at the Sundance Film Festival. Questions and answers have been edited for length and clarity.

What happens in a typical brain surgery? Typically the surgeon removes part of the skull, and goes through normal brain and gets down into the tissue to create a cavity where the tumor is.

Surgeons have to burrow through normal tissue?Yes, it’s like a seed in an orange. You can’t take it out without going through normal tissue. Then surgeons have to pull back the brain to create the cavity to work in. And then, using their surgical microscopes and their best senses and their fingers, they determine what appears to be cancer and remove it with traditional surgical techniques — like cutting and removing — or with a device that damages the cancer tissue and then sucks it out of the brain.

How do surgeons know where to cut? Currently, they use intraoperative electrodes — they put little probes into the brain tissue to see if it has waves that are similar to brain waves. And if they’re not sure, they’ll often leave that tissue behind. The problem is that sometimes they end up leaving big pieces of cancer behind.

It’s amazing that after cutting into brain tissue, peeling back the brain, and patching it all back up, people are still able to function.Well that’s a really important thing to bring up because nearly half of our children who have medulloblastoma [brain cancer] surgery will have some major deficits after their surgery for up to a year, and in some cases even longer. In that case, it’s not caused by the cancer. We believe it’s caused by stretching the normal brain to get the cancer out.

That must be heartbreaking.It’s totally heartbreaking. I believe the neurological challenges you see in the little boy in the film were caused primarily by stretching out the normal brain in order to remove his tumor. One of my great hopes is that with tumor paint, we’ll be able to do more keyhole surgeries, where they go in with an endoscope — something very tiny — and extract the tumor without having to tug on the brain to open it up and create a path to visualize the cancer.

Why do we need to light up tumors with the Tumor Paint agent? Don’t scientists already have ways to image cancer?You’d think that surgeons would already have a way to see what is cancer and what is not cancer, but that’s actually not the case. There are some cancers for which it’s easy to tell where the cancer ends and the normal tissue begins, but there are many cancers where it is impossible to tell — even with the best of our existing tools.

In some cases, these tumors are located in places where there’s critical normal tissue adjacent to the cancer. So you want to leave as much normal tissue as you possibly can to retain the function that you had before you developed cancer.

So, what exactly is the Tumor Paint drug?The Tumor Paint drug is made up of two parts. A targeting molecule that finds cancer cells, and a little fluorescent molecular flashlight that’s attached to it. The targeting molecule goes through the bloodstream after IV injection, finds the cancer cells, and gets internalized into the cancer cells. When you shine a laser light on them, they shine back a brilliant near-infrared light.Can surgeons actually see brightly glowing bits of brain?Near-infrared light is not visible with the human eye — it’s the kind of light that the armed services uses for night-vision. So you do need special equipment, but fortunately the equipment is already available and in operating rooms.

I’ve read that the targeting part of the drug uses scorpion venom.The original peptide from which tumor paint was derived came from the venom of a scorpion. We’ve since modified it to make it more suitable for FDA approval as a cancer drug. Currently the peptide is made synthetically in a laboratory.

No scorpions were harmed in the process of making tumor paint!

What gave you the idea to base a synthetic molecule off of scorpion venom in the first place?A very talented neurosurgery resident, Patrick Gabikian came into my lab for a year of research. He wanted to find a molecule that would take advantage of the differences between brain tumors and normal brain, and then develop it as a molecular imaging agent.

That sounded good, except he only had a year. I said, “Patrick, you can’t do all that work in one year. So what I’d like you to do instead is look through the scientific literature and all the computer databases.” Other scientists have been looking at differences between brain tumors and normal brain for many years. Once they get the information, they publish it and share it with the rest of the world, but often it’s nothing more than lists.

So every day for six weeks he came back to me with different candidate molecules. Finally, he came to me and said he found some articles in which they were studying chlorotoxin, which is the targeting agent in the Tumor Paint drug.

I said, “You know, I like this one because it was created by scorpions, and they’ve had millions of years to evolve this to have drug-like properties. So why don’t we attach a fluorescent molecule to it? We’ll skip all the experiments that look at cancer cells grown in tissue culture dishes and we’ll just do the real experiment — where we grow a human brain tumor in a mouse and inject the tumor paint molecule in the blood stream and see if the tumor glows.”

And what happened?We did that first experiment and then an hour and a half later, the tumor was glowing. It was the first time in my life that I was literally jumping up and down in my lab with my colleagues.

That’s pretty gutsy to skip all the preliminary experiments and go straight to the big one.I think that so much of cancer research is focused on looking at cancer cells in tissue culture because it’s convenient and inexpensive. But very often we end up spending months or years generating preliminary data only to find out later that there is a problem. So a focus of our lab is to go in vivo as quickly as possible.

Who funds your experiments?The initial work on the Tumor Paint platform was actually funded by the families of our patients.

NCI played an important role in funding and advancing tumor paint, and is continuing to do so now. The NCI also awarded a small business contract to Blaze Bioscience to do tumor paint studies in dogs. These are not experimental animals, these are dogs whose families have brought them into the Washington State University School of Medicine because they have cancer.

And they want to see this in human patients?Yes. And since we found that the Tumor Paint drug also works for other types of cancer, we will actually be studying cancers in other places as well. We don’t want to limit it to the brain.

So, how is the little boy in the film, Keaton, doing now?He’s one of those kids that came out of surgery and was doing pretty well in the first day or two, and then, as it typically happens, lost his ability to walk and talk. Most of them will recover up to 90 percent of that function over the course of a year. He had a much tougher course.Is there a chance he’ll get better?He’s still working super hard every day learning how to walk again and being able to talk. It’s really challenging for him. I think that additional improvements are going to be very slow—small steps forward. But, given his determination, I can only hope he’ll make good progress.

Is it hard for kids to recover from surgery? I know young brains are pretty plastic.Most of the kids recover, but some of them are really damaged permanently from the surgery itself — this is one of the areas where tumor paint could have a great impact.

How big of a deal would an advancement like this be? For those patients whose cancers are completely resected because of Tumor Paint imaging, this advancement could potentially mean the difference between life and death.

I think that in some other cases surgeons currently using their eyes and hands leave the operating room and say, “I think I got it all,” and tell that to the patient. And with these molecular imaging agents, my guess is they’re going to find that there are dozens or hundreds or thousands of spots of cancer that they couldn’t see with their naked eye. These patients might benefit from other therapies rather than “watch and see” approaches.

So this has ways to benefit cancer patients not only by improving the surgeon’s perception but also by giving a better understanding of how much cancer is left and where that cancer is.