Bringing Nitrogen Out to Pasture

Silvopasture systems with tree legumes and signalgrass in Pernambuco, Brazil. 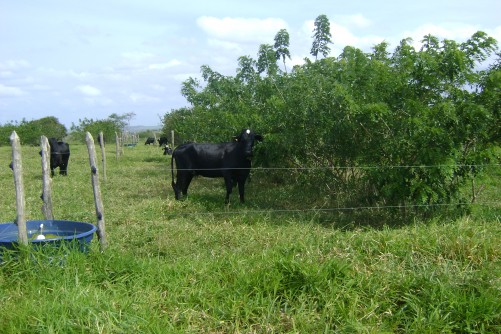 Dubeux is an assistant professor of Agronomy at North Florida Research & Education Center. Growing up, Dubeux spent a lot of time on his grandparents' farm in Brazil. There he developed a passion for livestock operations and the grasslands on which the livestock graze. That passion drew him to questions about silvopastoral systems. Silvopastoral systems combine crops and animals in the same location in a way that benefits both.

Unlocking the key to silvopastoral systems is especially important in Brazil. The tropical soil cannot support enough plant growth for grazing success. In order to grow enough forage for livestock, nutrients like nitrogen have to be added back into the soil.

Economic and environmental factors discourage many farmers from using industrial fertilizers. So Dubeux is exploring an alternative fertilizing method – tree legumes. Legumes naturally replace nitrogen in soil. Dubeux and his team wanted to know if tree legumes would be effective in a silvopastoral system. They needed to measure how much nitrogen the decomposing tree legume leaves and branches would put into the soil.

The researchers planted two types of legume trees in a Pernambuco state, Brazil, pasture. They gathered and bagged leaves from each of the two types of trees. They also gathered branches from the two types of trees, sorted by branch circumference. The team placed the bags of leaves and bags of branches in enclosed areas in the pasture and covered with cuttings. This simulated typical conditions around the trees. As the bags’ contents decomposed, researchers periodically weighed the bags and did a chemical analysis of their contents. Finally, researchers compared data from the beginning and end of the experiment.

“One of the most exciting and surprising things we found was that tree legumes could contribute significant nitrogen amounts to these systems," Dubeux explains. "We could actually measure how much of the nitrogen deposited by the leaves and branches would be available for the grass.”

While it does take a while to establish a silvopasture, Dubeux says the waiting can pay off. “When you sum the lumber value with the livestock production, you can double the gross income for the producer.”

Dubeux adds that silvopastures are also great news for the environment. “Nitrogen fertilizer is produced using natural gas and has a high carbon footprint, increasing the effects of global warming.” In contrast, tree legumes benefit the ecosystem as a whole and increase sustainability. 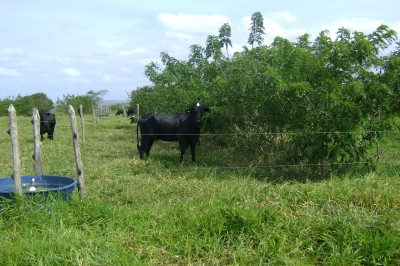