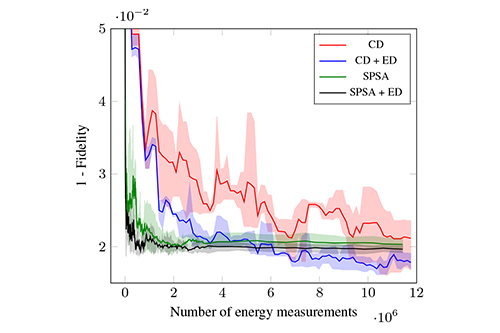 Performance of variational algorithms in a noisy simulation 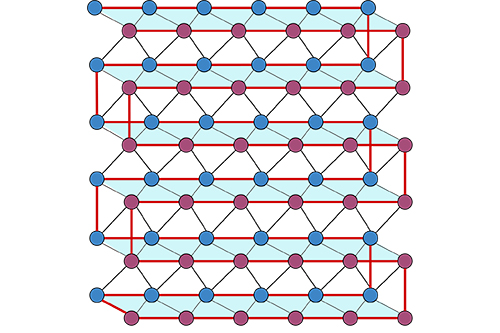 The team, led by Bristol researcher and Phasecraft co-founder, Dr. Ashley Montanaro, has discovered algorithms and analysis which significantly lessen the quantum hardware capability needed to solve problems which go beyond the realm of classical computing, even supercomputers.

In the paper, published in Physical Review B, the team demonstrates how optimised quantum algorithms can solve instances of the notorious Fermi-Hubbard model on near-term hardware.

The Fermi-Hubbard model is of fundamental importance in condensed-matter physics as a model for strongly correlated materials and a route to understanding high-temperature superconductivity.

Finding the ground state of the Fermi-Hubbard model has been predicted to be one of the first applications of near-term quantum computers and one that offers a pathway to understanding and developing novel materials.

“Near-term quantum hardware will have limited device and computation size. Phasecraft applied new theoretical ideas and numerical experiments to put together a very comprehensive study on different strategies for solving the Fermi-Hubbard model, zeroing in on strategies that are most likely to have the best results and impact in the near future.”

Lana Mineh, a PhD student in the School of Mathematics and the Centre for Doctoral Training in Quantum Engineering, who played a key role in the research, said, “The results suggest that optimising over quantum circuits with a gate depth substantially less than a thousand could be sufficient to solve instances of the Fermi-Hubbard model beyond the capacity of current supercomputers. This new research shows significant promise for producing the ground state of the model on near-term quantum devices, improving on previous research findings by around a factor of 10.”

Physical Review B, published by the American Physical Society, is the top specialist journal in condensed-matter physics. The peer-reviewed research paper was also chosen as the Editors’ Suggestion and to appear in Physics magazine.

Andrew Childs, Professor in the Department of Computer Science and Institute for Advanced Computer Studies at the University of Maryland: “The Fermi-Hubbard model is a major challenge in condensed-matter physics, and the Phasecraft team has made impressive steps in showing how quantum computers could solve it. Their work suggests that surprisingly low-depth circuits could provide useful information about this model, making it more accessible to realistic quantum hardware.”

Hartmut Neven, Head of Quantum Artificial Intelligence Lab, Google: “Sooner or later, quantum computing is coming. Developing the algorithms and technology to power the first commercial applications of early quantum computing hardware is the toughest challenge facing the field, which few are willing to take on. We are proud to be partners with Phasecraft, a team that are developing advances in quantum software that could shorten that timeframe by years.”

Phasecraft Co-founder Dr. Toby Cubitt: “At Phasecraft, our team of leading quantum theorists have been researching and applying quantum theory for decades, leading some of the top global academic teams and research in the field. Today, Ashley and his team have demonstrated ways to get closer to achieving new possibilities that exist just beyond today’s technological bounds.”

Phasecraft has closed a record seed round for a quantum company in the UK with £3.7m in funding from private-sector VC investors, led by LocalGlobe with Episode1 along with previous investors. Former Songkick founder Ian Hogarth has also joined as board chair for Phasecraft. Phasecraft previously raised a £750,000 pre-seed round led by UCL Technology Fund with Parkwalk Advisors and London Co-investment Fund and has earned several grants facilitated by InnovateUK. Between equity funding and research grants, Phasecraft has raised more than £5.5m.

Dr. Toby Cubitt: “With new funding and support, we are able to continue our pioneering research and industry collaborations to develop the quantum computing industry and find useful applications faster.”

‘Strategies for solving the Fermi-Hubbard model on near-term quantum computers,’ by Cade, C., Mineh, L., Montanaro, A. and Stanisic, S. in Physical Review B.

2x3_noisy.pdf (caption: “Performance of variational algorithms in a noisy simulation”)

Long at the forefront of the growing worldwide activity in this area, the Bristol Quantum Information Institute crystalises our research across the entire spectrum, from theory to technology.

With our expert cross-disciplinary team, including founders of the field, we have expertise in all major areas of theoretical quantum information science and in experiment.

We foster partnerships with the private sector and provide superb teaching and training for the future generation of quantum scientists and engineers and the prototypes of tomorrow.

Bristol's EPSRC-funded Quantum Engineering Centre for Doctoral Training offers an exceptional training and development experience for those wishing to pursue a career in the emerging quantum technologies industry or in academia. It supports the understanding of sound fundamental scientific principles and their practical application to real-world challenges.

Since it was founded in 2019, Phasecraft has established itself as an emerging leader in quantum research. It was started by leading quantum scientists, Dr Toby Cubitt, Dr Ashley Montanaro and Prof John Morton, who have spent decades leading top research teams at UCL and University of Bristol. Together they have built a team to enable near-term applications of quantum computing by developing high-efficiency algorithms to optimise the capabilities of near-term quantum hardware.

Read the insight piece on the research from the Phasecraft team here: https://www.phasecraft.io/insight/strategies-for-solving-the-fermi-hubbard-model-on-near-term

Caption: Performance of variational algorithms in a noisy simulation