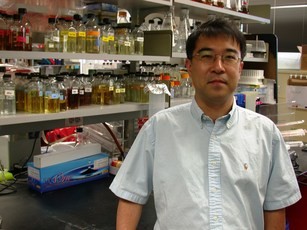 Newswise — Just as square dance partners join hands at a particular point in the music, so broken pieces of DNA in our cells reunite as they are repaired. Precisely and quickly, these DNA pieces identify each other and tether together. A tumor-suppressor gene called ATM choreographs this fast-paced, but reliable, reassembly operation.

Sometimes the process goes awry. An ATM mutation predisposes children to cancers. In this week's issue of Nature, researchers at The University of Texas Health Science Center at San Antonio describe this gene's regulatory work more fully than ever before.

The paper, from the UT Health Science Center's Institute of Biotechnology, is among the first to describe the molecular basis of chromosome translocations. These errors occur when genes from one chromosome glom onto another chromosome. Chromosomes are the tightly wrapped coils of DNA found in every cell.

Lead author Sang Eun Lee, Ph.D., associate professor of molecular medicine at the Health Science Center, suspected that chromosome translocations occur during DNA repair. DNA repair is the continuous process in which our genetic blueprint, or DNA, fixes damage caused by sunlight, diet, oxygen and chemicals that ding our DNA.

"This DNA repair process is usually highly accurate and reliable, but occasionally DNA makes the mistake of reshuffling or jumbling together material," said Dr. Lee, a member of the Cancer Development and Progression Program of the Cancer Therapy & Research Center at the UT Health Science Center. "Translocations are found in many cancers, particularly leukemia. The presence of translocations predicts the success or failure of treatments for these cancers."

Philadelphia chromosome-positive chronic myelogenous leukemia, a rare and aggressive cancer, involves translocation of genetic material from chromosomes 9 and 22, for example.

"The thing we haven't understood is how chromosome translocations happen," Dr. Lee said. "Our study recreated translocations in yeast cells. We monitored the translocation events in the context of DNA repair, which we believed to be the culprit."

"When damage occurs, a chromosome, like thread, can be broken," he said. "With exposure to radiation or other mutating agent, a chromosome may break in multiple places. Thankfully our DNA moves to repair this."

Snippets of DNA, separated from adjacent snippets of the same chromosome, must reunite with them quickly. "Partner selections are very important, and we found that this selection occurs in a very short window of time," Dr. Lee said. "We also observed the tethering together. Again, the gene central to all of this is ATM."

The majority of children with ATM deficiency die at a young age from cancer. ATM mutation causes the disease ataxia telangiectsia.

"We were missing why ATM causes cancers," Dr. Lee said. "Its strategic role in DNA repair, described in this paper, explains it."

These observations may make it possible to tweak cellular machinery to prevent translocations and to develop anti-cancer drugs that bypass ATM deficiency by regulating gene proteins that interact with ATM.

"Dr. Lee is following these chromosome events in real time during the repair process," said Z. Dave Sharp, Ph.D., associate professor and interim chairman of the Department of Molecular Medicine at the Health Science Center. "The proteins he studied are in yeast, but these proteins carry out the same function in human cells. That's the reason this paper is in Nature."

The National Institutes of Health and the Leukemia Lymphoma Society funded the study. Members of Dr. Lee's lab who worked on the project are Kihoon Lee, graduate student, and Yu Zhang, Ph.D., former graduate student.

The University of Texas Health Science Center at San Antonio is the leading research institution in South Texas and one of the major health sciences universities in the world. With an operating budget of $576 million, the Health Science Center is the chief catalyst for the $15.3 billion biosciences and health care sector in San Antonio's economy. The Health Science Center has had an estimated $35 billion impact on the region since inception and has expanded to six campuses in San Antonio, Laredo, Harlingen and Edinburg. More than 23,000 graduates (physicians, dentists, nurses, scientists and allied health professionals) serve in their fields, including many in Texas. Health Science Center faculty are international leaders in cancer, cardiovascular disease, diabetes, aging, stroke prevention, kidney disease, orthopaedics, research imaging, transplant surgery, psychiatry and clinical neurosciences, pain management, genetics, nursing, allied health, dentistry and many other fields. For more information, visit http://www.uthscsa.edu.