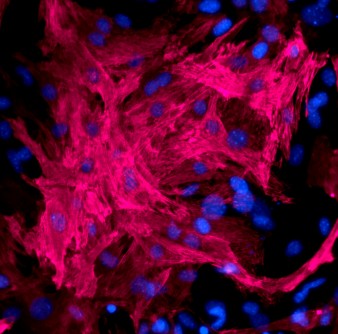 Newswise — CHAPEL HILL, N.C. – Patients with heart failure often have a buildup of scar tissue that leads to a gradual loss of heart function. In a new study published today in the journal Cell Stem Cell, researchers from the University of North Carolina School of Medicine report significant progress toward a novel approach that could shrink the amount of heart scar tissue while replenishing the supply of healthy heart muscle.

“Our past work brought hope that we could one day improve heart function in people with heart failure by converting scar tissue into beating heart muscle,” said Li Qian, PhD, assistant professor of pathology and laboratory medicine and the study’s senior author. “But that was more of a proof-of-principle study, and the conversion rate was quite low. Now we have found the barrier to conversion, and by removing it, we have been able to significantly increase the yield of muscle-like cells.”

Heart failure has no cure and currently affects an estimated 5.7 million people in the United States. Common symptoms include shortness of breath, fatigue, and swelling, all of which often worsen as the heart weakens over time.

“Our hope is that this approach could extend the lives of people with heart failure and markedly improve their quality of life in the future,” said Qian, who is also a member of the McAllister Heart Institute at UNC.

In 2012, Qian and her colleagues created a “cocktail” of proteins capable of converting fibroblasts, which create scar tissue, into cardiomyocytes – heart muscle cells that beat on their own exactly the way regular heart muscle cells do. Notably, the team’s approach did not require converting fibroblasts into stem cells, which is typical of other tissue regeneration techniques. Qian’s approach lowered the likelihood of uncontrolled cell growth and tumor formation.

In experiments using mice, the cocktail proved successful at shrinking the size of scar tissue and improving heart function. But the process had remained disappointingly slow – until now.

“We wanted to have a better yield and shorten the conversion time so in the future this process could be fast, easy, and efficient for disease modeling or for treatment,” Qian said.

The new breakthrough came when the team discovered that a gene called Bmi1 interfered with the expression of other key genes needed to convert fibroblasts into heart muscle cells. Bmi1 previously had been investigated for its role in neural stem cells and cancer cells, but this is the first study to pinpoint a role in its interaction with cardiogenic genes.

When the team depleted Bmi1, the conversion rate sped up markedly; the percentage of fibroblasts that transformed into heart muscle cells increased 10-fold. Repressing Bmi1 also allowed Qian’s team to simplify the cocktail by reducing the number of different proteins in it.

The ultimate goal, Qian said, is to refine the cocktail into a pill that could safely be given to patients during a heart attack or after the heart has already become damaged, thus reducing the long-term loss of functional heart tissue and helping people live longer, healthier lives. If further experiments using larger animal models bear out, Qian estimates such a pill could be developed within a decade.

The technique also holds potential for improving personalized medicine. Currently, there are a number of therapeutics doctors can prescribe to help improve a patient’s heart function, but there is often trial and error involved to find the most effective drug with the fewest side effects. Qian’s protein cocktail could help avoid this. For instance, if Qian’s technique could convert a patient’s skin cells into heart muscle cells in a lab dish, then lab technicians could use the resulting cell culture to quickly screen existing drugs and find the one most likely to help a specific patient.

In addition, the team’s approach and platform built to study barriers to cardiac reprogramming could help to increase yields for studies focused on reprogramming other cells, such as neurons, pancreas cells, and liver cells for regenerative purposes.

“Hopefully these findings and our approach can be leveraged so that other researchers can identify the barriers to regenerating other types of target tissues more efficiently,” Qian said.