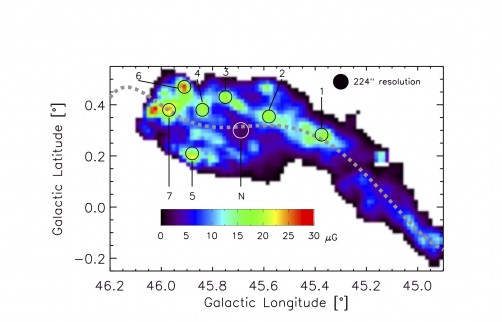 Magnetic field strength map of the galactic gas and dust cloud. Field strengths rise up to 30 micro-Gauss in this pseudo-color rendering. The seven 'magnetic cores' are circled and numbered. The gray, dashed curve locates the cloud 'spine.' The cloud is nearly 120 light-years long, contains nearly 17,000 solar masses of gas and dust, and is ready to form new stars.

Newswise — Boston—Boston University undergraduate researcher Rob Marchwinski and his colleagues in BU’s Astronomy Department may have found the answer to a universal question: Why aren’t there more stars?

A possible answer to that question presented itself to Marchwinski while he, graduate student Michael Pavel and Professor of Astronomy Dan Clemens used new data from the Galactic Plane Infrared Polarization Survey (GPIPS) to create the first complete map of magnetic field strength in a large, interstellar gas cloud. (The GPIPS is being conducted by BU astronomers on the 1.8-meter Perkins telescope, which is shared by Boston University and Lowell Observatory in Flagstaff, Arizona.)

Stars form when large clouds of interstellar gas and dust nucleate or form centers, eventually consolidating into dense cores, which in tum collapse under the force of gravity. While the steps in the star formation process have become better understood in recent years, the rate at which new stars form has remained something of a mystery. Indeed, most models predict there should be up to ten times more stars forming than are observed. What is preventing stars from forming at faster rates?

Working with more than 3000 infrared polarization measurements—out of the roughly one million gathered by the GPIPS—Marchwinski was able to identify the very weak magnetic field present in a gas cloud located about 6000 light-years away in the constellation Aquila. The huge cloud, spanning an area of 30 by 120 light-years, contains more than 17,000 times the mass of the Sun in diffuse gas and dust. However, despite its enormous size, the BU researchers have measured an average magnetic field strength of just over five micro-Gauss—about one hundred thousand times weaker than the magnetic field on Earth.

They also found seven dense cores within the cloud, with average masses of one hundred times that of the Sun. These cores, which eventually will develop into new stars, are also sites of somewhat stronger magnetic field strengths that are just strong enough to prevent gravitational collapse. "It is surprising that magnetic fields as weak as these can disrupt star formation, but it seems to be the case in this cloud," said Marchwinski.

The BU findings, representing the first complete and detailed map of the magnetic field strength in an interstellar cloud, was published today [Aug 20] in The Astrophysical Journal [The Astrophysical Journal, 755:130 (10pp), 2012 August 20; doi:10.1088/0004-637X/755/2/130]. This study and the GPIPS project were made possible by support from the National Science Foundation and Boston University’s partnership with the Lowell Observatory.

About Boston University—Founded in 1839, Boston University is an internationally recognized private research university with more than 30,000 students participating in undergraduate, graduate, and professional programs. As Boston University’s largest academic division, the College and Graduate School of Arts & Sciences is the heart of the BU experience with a global reach that enhances the University’s reputation for teaching and research.