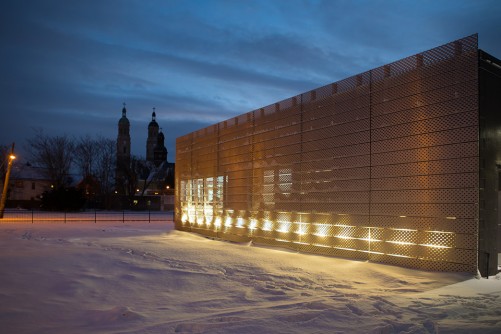 A stunning inversion occurs at night in Light/Station, an adaptive reuse project designed by University at Buffalo architect Christopher Romano. 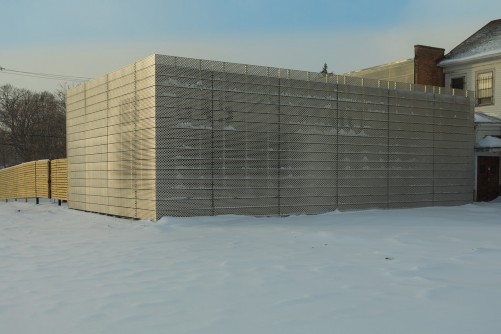 The former gas mart building on Buffalo's East Side is wrapped in deep-textured, perforated sheet metal panels, 3/64-inch thick, manufactured and fabricated by Buffalo’s Rigidized Metals. The words “GAS MART” are subtly registered into the back layer of the double-layer façade in an ode to the history of the site. 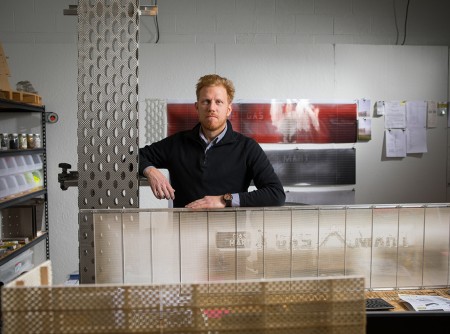 Light/Station designer Christopher Romano, photographed with some of the early prototypes he developed in the Fabrication Workshop at the University at Buffalo's School of Architecture and Planning.

Newswise — BUFFALO, N.Y. — During the day, light pours in from two sides through the more than 72,000 holes laser-precision drilled into the stainless steel panels that veil the building’s façade.

At night, an inversion occurs and light glows from within, identifying the structure’s presence in the surrounding neighborhood.


For his newest project, University at Buffalo architect Christopher Romano embarked upon a two-year journey through the manipulation of light and metal as design materials. The result is a signature architectural structure nestled in the shadows of three iconic buildings on Buffalo’s historic East Side.

Light and history were core components of Romano’s design concept from the beginning.

“Light serves as the connective tissue for all the components of the façade. It’s a material. It’s a central element to the multi-layered façade, where the lighting is a layer behind the steel panels, which typically isn’t done because it’s risky,” says Romano, who designed the façade through his firm Studio NORTH Architecture.

Romano is also a research assistant professor in UB’s School of Architecture and Planning. A small team of UB architecture students also worked on the project.

Some of the smaller prototypes were developed and tested using the school’s digital fabrication equipment under the direction of Daniel Vrana, a staff member in the Fabrication Workshop and current employee at Studio NORTH Architecture.

It was also important that the project contribute to the community. Torn Space founder Dan Shanahan says the new facility reflects the theater company’s commitment to the East Side’s Broadway/Fillmore corridor.

“We believe Light/Station is a catalyst project that will encourage further investment in the area, while making needed improvements to our facilities to ensure we will continue showcasing inventive, relevant and exciting performance,” Shanahan said.

“We appreciated that we were developing a property that would be in conversation with the Central Terminal and St. Stanislaus Church,” he added. “We wanted to design a building that complemented these structures while creating a signature design. Christopher Romano, his team and Rigidized Metals Corporation were able to create something very special and did a fantastic job delivering a building that also functions as an artistic statement.”

The former gas mart building is wrapped in deep-textured, perforated sheet metal panels, 3/64-inch thick, manufactured and fabricated by Buffalo’s Rigidized Metals, a key industrial partner of the School of Architecture and Planning.

Tiny holes drilled into each panel strategically capture or emit light, depending on the time of day. Romano and the Rigidized Metals team spent months experimenting with every aspect of the sheet metal, pushing boundaries with each iteration.

The team ran algorithms to generate the hole patterns that would be precision-cut into each piece of sheet metal, testing on smaller prototypes in order to get just the right size hole to allow light to pass through and create the desired effect.

“We did everything we could to make cutting holes into metal the most magical experience ever,” Romano says.

“It was a laborious process — 6.3 miles of cutting on the laser. We maxed out Rigidized Metals’ fabrication capacity. I was actively trying to push the limits of metal manufacturing with the goal of making the most beautiful metal façade possible.”

Folding the custom-made columns that hold up the building’s exterior required 180 tons of pressure.

While the building is new, history played an important role in the project. It’s positioned among a triangle of some of the East Side’s most historic cultural institutions: the Central Terminal to the east, the Broadway Market to the north, and St. Stanislaus Roman Catholic Church to the south.

The gas station that once stood where Light/Station now sits served as inspiration, factoring prominently into the design. “I was really interested in preserving the idea of gas stations, the legacy of gas stations and the intensity of light, especially at night, that they typically evoke,” says Romano.

The words “GAS MART” are subtly registered into the back layer of the double-layer façade.

“It needed to be recessed, visible, but only from certain vantage points and in certain lighting conditions,” Romano explains. “I was trying to tie together a much deeper history of the site while using modern manufacturing to bring that narrative to life. You don’t quite see GAS MART right away, but you understand there’s something there to investigate.”

Project participants first met in December 2015 with Stieglitz Snyder Architecture, the architect of record for Light/Station.

As the architectural consultant, Romano was involved with every aspect of the project from start to finish, and no detail was left untouched. “The mandate was always, make the project better,” he said.

“I was involved every step of the way, from the very first meeting we had with the architect of record, right down to the head of the fastener. We had meetings about the fastener.” 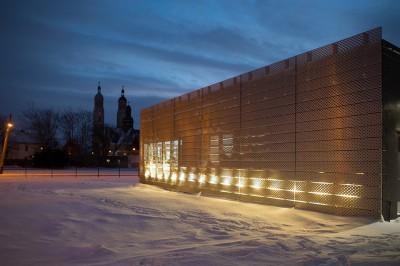 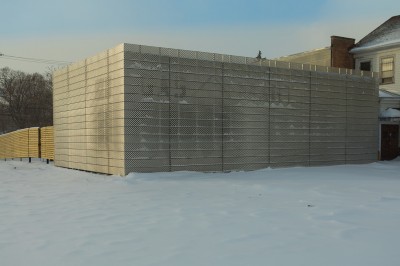 Caption: The former gas mart building on Buffalo's East Side is wrapped in deep-textured, perforated sheet metal panels, 3/64-inch thick, manufactured and fabricated by Buffalo’s Rigidized Metals. The words “GAS MART” are subtly registered into the back layer of the double-layer façade in an ode to the history of the site. 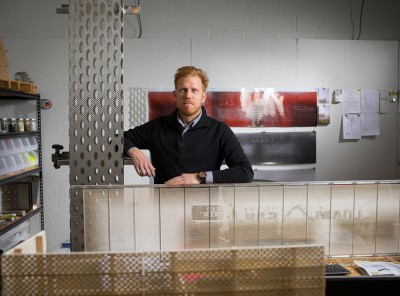 Caption: Light/Station designer Christopher Romano, photographed with some of the early prototypes he developed in the Fabrication Workshop at the University at Buffalo's School of Architecture and Planning.