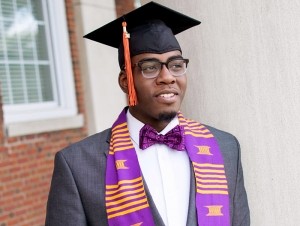 Nicholas Irion, '17, was one of the first Buffalo Public School students to be involved with the Say Yes to Education initiative. Through the program, Irion landed at Buffalo State, where he graduated with a bachelor’s degree in music education.

It’s been a lot of work.

For Irion, Buffalo State provided the opportunity to flourish and grow as a student. It also gave him the experience to mentor other students from Say Yes.

Irion worked with Say Yes’s Summer Bridge program, where he mentored students coming into the college from the program. He also worked with the Center for Excellence in Urban and Rural Education, running after-school programs. In his role with the center, he had about 25 student assistants working under him.

Often, Irion found himself mentoring other students who had nothing to do with the programs he was working with.

“I was working with primarily minority students who would come seeking help on campus and they knew of me,” he said. “Different things, whether it was classwork, academics or they needed help just going to the next level. It was just mentoring, which I’m very big on. I just did it because I felt it was my duty to give back to this campus that had done so much for me.”

Irion also credits Greek life on campus for some of the connections he’s made and success he’s had. As a member of Omega Psi Phi, he became an advocate for student organizations. He made connections in the Career Development Center focusing on career counseling, and through working with other pre-collegiate programs, he was able to get mentoring programs started at several neighborhood schools.

As Irion looks forward to going to Duke, he said he enjoyed his time as a student and employee at Buffalo State.

For incoming students, Irion said it’s vital that they do more than the bare minimum to get by.

“Get involved, get to know people,” he said. “Education is what you are here for. Education is key. Education is the most important thing. With education comes experience and you make it what it is. If you want to have fun, go and have fun. Make sure you’re putting that education part first.”

“You have to get out and get to know people,” he said. “You need that camaraderie with people.”

“It has been such a pleasure to have Nick on campus as both a student and an employee and now I am elated to see moving him ahead to achieve his graduate degree at Duke University,” Conway-Turner said. “Nick has been a wonderful model for all of our students. He has demonstrated how with energy, passion, and commitment you can soar to high levels. We will miss him on campus, but I look forward to his return visits as he shares his next successes with Buffalo State students.”

Irion is a pastor in Buffalo, and he plans to continue his pastoral duties in North Carolina, as he completes his degree at Duke. He also plans on continuing his mentoring work with Duke students and others he may run into.

“I may start my own mentoring program in the area that I’ll be in,” he said.