UNLV’s young debate team is ranked fifth in the nation and poised to make a deep run in March’s National Debate Tournament. 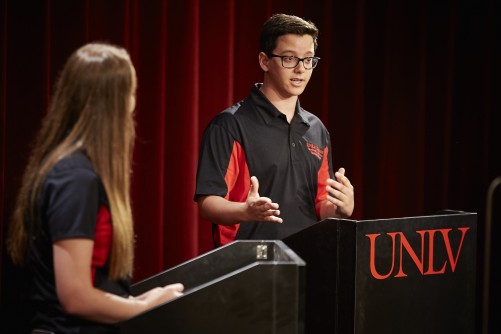 UNLV's debate team, including Jeffrey Horn (right), is rising up the rankings and will compete for a national title in March.

Newswise — As the college hoops season heats up for the start of March Madness, basketball isn't the only collegiate competition where UNLV fans can pin their hopes for a deep tournament run this month.

UNLV’s debate program is rising up the college rankings and has its eye on number one as it prepares for the National Debate Tournament March 23-26 at Wichita State University.

The national competition is the March Madness of debate, accepting 78 teams from across the nation, with the top 16 earning an automatic invite. The rest qualify through district tournaments.

At the end of the regular season, UNLV currently ranked fifth nationally in varsity standings, ahead of heavyweights like Cornell, Northwestern, and Baylor. The Rebels’ duo of senior Matthew Gomez and junior Jeffrey Horn sits in third following a dominating regular season where they won 71 of 92 debates and two tournament titles.

“UNLV has a legitimate shot, as good as any team in the tournament, to win a national championship this year,” said debate coach and UNLV professor Jacob Thompson.

Gomez and Horn, on the heels of a stellar season, were automatic qualifiers. A second UNLV team, made up of senior Roman Kezios and junior Reece Aguilar, qualified in February after winning the 2018 Pacific Champions Debate Tournament.

In competitive debate, two-person teams argue both for and against a policy-related topic. Debaters earn points by making their case in fast and furious fashion: 350-400 words per minute. For perspective, the normal pace of conversation is about 150 words per minute.

The reason for fast-talking is simple: the more policy points you make before the clock runs out, the more scoring points you get.

UNLV’s road to national debate prominence began in 2007. A $1.5 million gift from Dr. Sanford and Sandra Berman revived the program, which was shuttered in the late 1990s due to budget cuts. The gift led to the recruitment of coach Thompson, and the team took off from there.

“My goal the day I got here was to build a team of hard-working students capable of winning a national championship, and doing it the right way,” said Thompson. “We stress positivity and a commitment to teamwork, and we represent our university to the best of our ability every day.”

UNLV debate cracked the top 10 for the first time in 2012 and hovered there until its breakthrough this season. Thompson credits a positive, team-first culture, and a growing history of success for the rise – most notably Gomez and Horn’s trip to the elimination round of last year’s national tournament.

“That was the moment we broke through,” said Thompson. “Gomez and Horn put the debate community nationally on notice that we’re a team to keep an eye on.”

UNLV’s squad consists of eight, two-person teams, along with coaches and support staff. Teams compete based on skill level in novice, junior varsity, and varsity divisions.

The “switch-side” format for debate requires teams to argue both for and against a position. A single topic is set nationally at the beginning of each season in late July and teams hone their skills as the season wears on. This year’s topic is national health insurance policy.

“Arguments are always evolving, and we’re constantly putting in work to craft our arguments and develop new ones,” said Gomez. “We want to understand every nuance of the issue so we’re ready to compete and succeed.”

Gomez and Horn spend 40-50 hours per week refining their argument, with that number ramping up before big tournaments.

“That’s what sets them apart,” said Thompson. “They put an incredible amount of time and effort into debate. They’ve always been focused, but this is next level dedication.”

If success breeds success, Thompson is confident that top high school debaters will take note of the Rebels’ steady rise to prominence when they’re ready to make their college choice.

“The ultimate goal is to create recruiting pipelines that bring top students to our university,” said Thompson.

He is quick to point out that any student, whether they have prior debate experience or not, is welcome if they’re willing to put in the work. “We want to create opportunities for all students – including those new to the game – to find their voice and become top college debaters.”

The time and effort students put into debate are not without benefits. During the course of the debate, students learn public speaking, they pack in research equivalent to a master’s thesis, and, thanks to their rapid-fire rhetoric, no one will ever have to tell them to get to the point in a conversation.