Japanese paper-folding art creates switches that, when placed in a group on a single board, can serve as a type of mechanical memory. 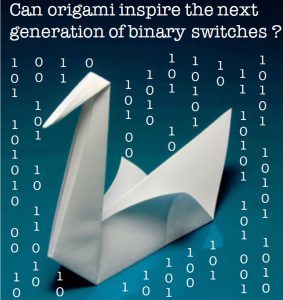 In Applied Physics Letters, by AIP Publishing, researchers report the fabrication of such a paper device using a particular origami pattern known as the Kresling pattern. This device can act as a mechanical switch.

By putting several of these together on a single platform, the investigators built a functioning mechanical memory board.

Origami structures can be either rigid or nonrigid. For the first type, only the creases between panels of paper can deform, but the panels stay fixed. In nonrigid origami, however, the panels themselves can deform.

The Kresling pattern is an example of nonrigid origami. Folding a piece of paper using this pattern generates a bellowslike structure that can flip between one orientation and another. The bellows act as a type of spring and can be controlled by vibrating a platform that holds the bellows. This creates a switch, which the investigators refer to as a Kresling-inspired mechanical switch, or KIMS.

The researchers found that oscillating a platform holding the KIMS up and down at a certain speed will cause it to flip, or switch, between its two stable states. They used an electrodynamic shaker to provide controlled movements of the base and monitored the upper surface of the KIMS using a laser. In this way, they were able to map out and analyze the basic physics that underlies the switching behavior.

“We used the Kresling origami pattern to also develop a cluster of mechanical binary switches,” author Ravindra Masana said. “These can be forced to transition between two different static states using a single controlled input in the form of a harmonic excitation applied at the base of the switch.”

The group first considered a 2-bit memory board created by placing two KIMS units on a single platform. Because each KIMS bit has two stable states, four distinct states identified as S00, S01, S10 and S11 can be obtained. Oscillations of the platform will cause switching between these four stable states. This proof of concept with just two bits could be extended to multiple KIMS units, creating a type of mechanical memory.

“Such switches can be miniaturized,” said Mohammed Daqaq, one of the authors and the director of the Laboratory of Applied Nonlinear Dynamics at NYU Abu Dhabi. “Instead of using a bulky electrodynamic shaker for actuation, the memory board can then be actuated using scalable piezoelectric and graphene actuators.”