Bullying Based on Stigma Has Especially Damaging Effects

Study examines strategies used to help victims targeted based on race, sexual orientation or other characteristic 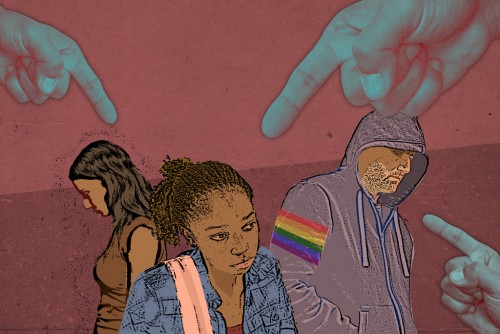 Bullying can be based on stigmas and interventions can vary.

Newswise — Bullying is an issue that is constantly in the news - either as a standalone story about a particularly egregious case or as a major contributor to much larger issues, including school shootings.

In a new study, two UD professors are looking at bullying based on stigma - where one is treated unfairly or unjustly due to one's race, sexual orientation, gender, or other characteristic - and examining the methods used to prevent this type of bullying and address it when it happens.

"I became interested in this because we're realizing that being bullied due to a stigmatized characteristic or identity is really harmful. I started wondering what people are doing about it, and whether they are doing the right things about it," said lead author Valerie Earnshaw, a professor of Human Development and Family Sciences.

In a study released recently in the journal Developmental Review, Earnshaw, Assistant Professor Tia Barnes and their colleagues found that although there has been an increase in stigma-based bullying interventions, there are some issues with how these interventions are being implemented and evaluated.

"Stigma-based bullying has always been around, but I think that there have been some recent societal shifts that have led people to pay more attention to it," Earnshaw said.

Earnshaw is already in the process of developing new research based on the study. One project focuses specifically on increasing the capacity of school health professionals to address LGBTQ bullying. It aims to develop and pilot an intervention that can help these professionals prevent, identify, and address bullying of LGBTQ students, particularly of multiracial backgrounds and those who identify as transgender.

Earnshaw said that some strategies like bystander intervention, where students not involved in a bullying incident speak up or intervene in an incident, could be helpful to address all forms of bullying. But specific strategies that address stigma, like reducing stereotypes and prejudice, may be necessary to address stigma-based bullying.

Stopping bullying before it starts

Earnshaw said that although research has not made strong connections between gun violence in schools and stigma-based bullying, some signs are there.

The perpetrator of the school shooting in Parkland, Florida had connections with a white supremacy group, she said. Other perpetrators of gun violence have histories of engaging in gender-based harassment and/or violence.

An intervention to address bullying could be a focused, one-on-one effort with the victim or a perpetrator, or it could be a preventative measure imposed on a whole school.

The study shows an increase in interventions to address stigma-based bullying (such as bullying of young people with stigmatized identities, like LGBTQ youth, overweight youth and youth with disabilities).

"This is good," Earnshaw said. "People are realizing that stigma-based bullying is harmful, and they're trying to do things to stop it or help youth experiencing it."

The reason seems to be issue-oriented: for example, the momentum for equality and civil rights for LGBTQ individuals and support for gay marriage seems to have brought the issue of LGBTQ bullying to the fore.

While this is a positive, it also means that interventions aren't evenly distributed across stigmas.

Barnes, who focuses more on race-based bullying, said the team could only find two types of interventions used at schools that addressed race. But she said she wonders if the recent shift in political climate, where students are targeted because they are Muslim or even appear that way to perpetrators, could boost that number.

"We talked a lot about what future research directions should be," said Barnes, whose PhD is in special education. "It would definitely be that we do need more research on race-based bullying and more interventions at the school level."

And that is perhaps the most important finding: That more findings need to be made. In other words, Earnshaw said, stigma-based bullying interventions should be rigorously evaluated to see how and why these interventions work.

"Overall, stigma-based bullying is a complex phenomenon that takes an 'all hands on deck' approach to address," Earnshaw said. "Students, teachers, parents, healthcare providers, coaches, religious leaders, and policymakers all have a role to play in ending it and improving the wellbeing of youth who are affected by it."