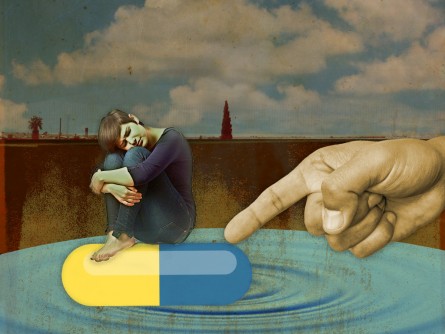 Newswise — A new study led by the University of Delaware found that kids who are bullied in fifth grade often suffer from depression and begin using alcohol and other substances years after the initial incidents.

"Students who experienced more frequent peer victimization in fifth grade were more likely to have greater symptoms of depression in seventh grade, and a greater likelihood of using alcohol, marijuana or tobacco in tenth grade," said the study's leader, Valerie Earnshaw, a social psychologist and assistant professor in UD's College of Education and Human Development.

The study involved researchers from universities and hospitals in six states, who analyzed data collected between 2004 and 2011 from 4,297 students on their journey from fifth through tenth grade. The findings were published online in the medical journal Pediatrics.

The students were from Birmingham, Alabama; Houston, Texas; and Los Angeles County, California. Forty-four percent were Latino, 29 percent were African American and 22 percent were white.

Although peer victimization is common during late childhood and early adolescence and appears to be associated with increased substance use, few studies have examined these associations longitudinally -- meaning that data is gathered from the same subjects repeatedly over several years -- or point to the psychological processes whereby peer victimization leads to substance use.

Peer victimization leads to substance use, and substance use can harm adolescent development with implications for health throughout the lifespan, Earnshaw said. Alcohol and marijuana use may interfere with brain development and can lead to injuries. Tobacco use may lead to respiratory illness, cancer and early death.

"Youth who develop substance use disorders are at risk of many mental and physical illnesses throughout life," Earnshaw said. "So, the substance use that results from peer victimization can affect young people throughout their lives."

Earnshaw used structural equation modeling -- a form of statistical analysis -- to examine the multiple variables across time and to test if there were relationships among them. She started working with the data in summer 2015 and finalized the model in fall 2016 in her office in UD's Alison Hall.

An expert in stigma research, Earnshaw wants to understand why people treat other people poorly and how this poor treatment leads to poor health, including through substance use behaviors. She hopes this latest study will enlighten pediatricians, teachers, parents -- anyone in a position to help students facing peer aggression.

"We urge pediatricians to screen youth for peer victimization, symptoms of depression and substance use," says Earnshaw. "These doctors can offer counsel to youth and recommendations to parents and youth for approaching teachers and school staff for support. Moreover, youth experiencing depressive symptoms and substance use should be offered treatment when needed."

"Peer victimization really matters, and we need to take it seriously -- this echoes the messages educators already have been receiving," Earnshaw says. "This study gives some additional evidence as to why it's important to intervene. It also may give teachers insight into why students are depressed or using substances in middle and high school."

The research is based on student data collected for Healthy Passages, a study of risk and protective factors in adolescent health, sponsored by the Centers for Disease Control and Prevention.

The Agency for Healthcare Research and Quality supported Earnshaw's work on the study.