No Mercury Accumulation in Fish After Fire 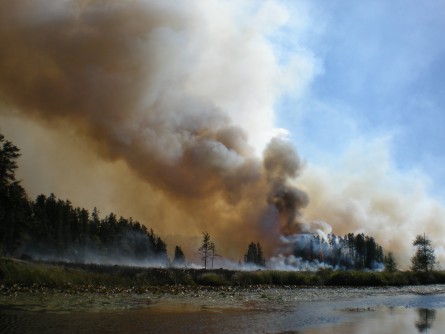 Wildfires such as the one pictured here in the BWCWA are part of the ecological system. 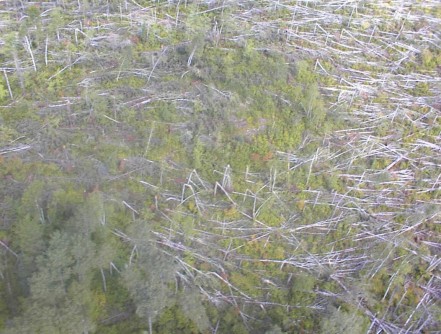 Wind-felled trees such as these in 1999 become a fire hazard. Controlled burns minimize the risk. 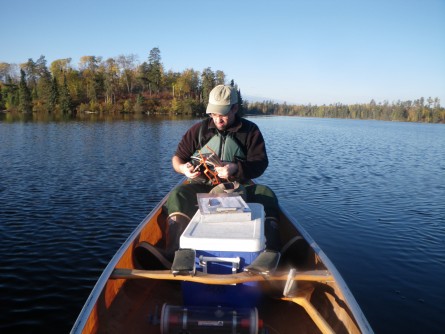 IMGP0040: Trent Wickman of the USDA Forest Service collects data in the Boundary Waters Canoe Wilderness Area in northern Minnesota. The Forest Service was concerned that wildfires would lead to increased levels of mercury in watersheds.

Newswise — June 21, 2017 - The USDA Forest Service in the Boundary Waters Canoe Wilderness Area (BWCWA) will continue to use controlled burns without worrying about fish health in associated watersheds, researchers say.

“Fire is a part of this community,” said soil scientist Randall Kolka of the USDA Forest Service Northern Research Station, one of the lead authors in the study. “By using it you can lessen the chance of wildfire.”

Controlled burns prevent wildfires from ripping through the BWCWA in northern Minnesota. The million-acre area encompasses forested hills, wetlands, over 1,100 lakes, and hundreds of miles of streams. Without occasional burns, fallen trees accumulate like matchsticks, creating the perfect environment for uncontrollable wildfires.

That’s what happened on July 4, 1999 in the BWCWA. Strong winds felled millions of trees on swath from North Dakota all the way to Maine. After this blowdown event, the Forest Service began prescribed burns to prevent future wildfires.

But the Forest Service was concerned about the consequences of prescribed burns on the health of pristine lakes and streams in the area. In addition to the environmental concerns, there are economic ones: the wilderness area attracts over 250,000 visitors a year.

“This is a Class 1 Wilderness,” said Kolka. “We have people coming in from all over: scouts, fishing enthusiasts, hikers, canoeists, and kayakers.”

Specifically, Kolka wanted to know if the burns add mercury, toxic at very low levels, to fish in the watershed.

Mercury’s path to the wilderness is complex. Fossil fuels burnt elsewhere release mercury into the atmosphere. This airborne mercury can travel great distances until it finally falls, lodging in soil or vegetation. The Forest Service worried forest fires were releasing this fallen mercury and carrying it into water bodies where it could contaminate fish.

Previous research on wildfires and mercury levels show mixed results. Some studies indicate higher levels of mercury in fish after severe fires. Other studies show that prescribed burns can disrupt the food web of watersheds by adding nutrients that leads to higher mercury. Still other research shows little effect of prescribed or wildfires on fish mercury levels.

Regardless, Kolka said the health risks of mercury made it imperative for the Forest Service to understand how their burns were affecting mercury levels in local fish.

“We wanted to follow the mercury from the atmosphere, through the soils, and into the food chain,” said Kolka.

So Kolka and group of researchers from the USDA Forest Service, the University of Minnesota, and Stockton University compared two similar lakes in the BWCWA over nine years. The two lakes are shallow, small, and surrounded by forests and wetlands. During the experiment, two fires (a low-severity prescribed fire in 2004, and a moderate severity wildfire in 2007) disturbed one watershed. The other watershed remained untouched by fire.

The researchers checked mercury concentrations in yellow perch before and after the two fires. They also examined soils and lake chemistry to see how the fire affected the watershed generally. Then they compared the fire-affected lake to the untouched lake.

The researchers found that although wildfires release the mercury in the soil, it didn’t necessarily end up in the fish. The fires had no effect on mercury levels in yellow perch. The fires also didn’t seem to significantly disrupt watershed food webs.

“We found no direct effect,” said Kolka. “So we can’t point the finger at forest fires.” Kolka said the mercury from the forest fires was likely deposited somewhere else downwind from the fires.

However, none of the fires were severe. One of the fires was the Forest Service’s controlled burns. The other began naturally and was more intense, but moderate compared to severe wildfires. Kolka said the next step is to measure the impact of a severe wildfire. The Forest Service will continue to monitor the area, and pay close attention when a major wildfire occurs.

Read more about Kolka’s research in Journal of Environmental Quality. This research was funded by the Joint Fire Sciences Program and the USDA Forest Service Northern Research Station.