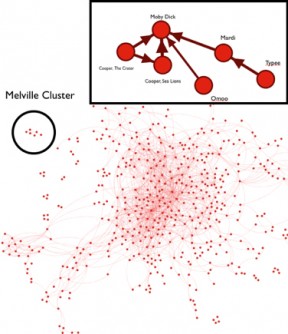 A detailed view of Jockers' literature map showing just American authors — including a cluster of works near Herman Melville's "Moby Dick," which was similar to several books by James Fenimore Cooper.

Newswise — Mark Twain once said that all ideas are second hand, consciously and unconsciously drawn from a million outside sources. Oscar Wilde put it more bluntly when he said that talents imitate, but geniuses steal.

Matthew Jockers has assembled a way to quantify the spirit of those sayings, particularly when it comes to certain authors and the impressions they left on other writers. And in doing so, he’s opened a new door for literary theorists to study classic literature.

Jockers, an assistant professor of English at the University of Nebraska-Lincoln, combines programming with text-mining to compare 18th- and 19th century authors’ works with one another based on their stylistic and thematic connections. The process, which he calls macroanalysis, crunches massive amounts of text to discern systematically how books are connected to one another – from each work’s word frequency and word choice to its overarching subject matter.

“We’ve known for some time how to search these works electronically, and how to look for things we already know are out there,” said Jockers, a fellow at UNL’s Center for Digital Research in the Humanities. “But the question became ‘How do we mine them to find something we don’t already know?’ What became apparent was that the next frontier was analyzing large amounts of text to learn new things (about the books), and this is a way to do just that.”

Using macroanalysis, Jockers processed digital versions of nearly 3,500 books from the late 1700s through 1900 – everything from giants like Jane Austen and Herman Melville to lesser-known writers such as Scottish novelist Margaret Oliphant. The process affixed each book with its own unique “signal,” allowing it to be plotted graphically near other books that it was closely related to, but farther away from books exhibiting more dissimilar styles and themes.

The result was a stunning graphical distribution that displays connections, insights and trends both obvious and perhaps not so obvious about the period’s literary world. The systematic method found that, unsurprisingly, the books of Austen and Sir Walter Scott were highly original and influential; and that Melville’s “Moby Dick” was an outlier from much of the literary network of the period while still being related to several works by James Fennimore Cooper.

And, though gender was not included in the comparison data, the program plotted a large majority of the period’s books by female authors in very close vicinity of one another.

Another insight: On the map, habits of theme and style were seen to evolve chronologically, and most authors throughout the period huddled into clusters on the map near their chronological peers.

Jockers said the process of macroanalysis isn’t intended to be a computerized replacement for literary theory – rather, it’s a complementary method that, in the hands of theorists, can help them read and study classic authors’ works in new ways.

And he’s careful in his use of the word “influence,” as well: While measuring and tracking true influence, either conscious or unconscious, isn’t really possible, Jockers said macroanalysis enables theorists to use measures of stylistic and thematic affinity as a clear indicator of an author’s influence.

“Literary scholars are very interested in influence – and this is a kind of quantitative measure of similarity, as a proxy for influence,” he said. “This doesn’t take into account things like plot, or form. But the data we’ve mined is a legitimate way to judge similarity between different texts.”

Jockers presented his work in July at the international Digital Humanities Conference in Hamburg, Germany. It also will be included in a book he’s now completing called “Macroanalysis: Digital Methods and Literary History.”

At the macro scale, it’s clear that the most recognizable and well-read books from the era are not isolated books, he said during his Hamburg presentation. It’s also clear that Macroanalysis can be a powerful tool for literary theorists to collect new information about both familiar and unfamiliar works.

“The canonical greats are not necessarily outliers, often they’re similar to the many orphans of literary history that have long been forgotten in a continuum of stylistic and thematic change,” he said.

“Macroanalysis provides one method for studying the orphans and the classics side by side – a way of sifting through the haystack of literary history, of isolating and then studying the canonical greats within the larger population of less familiar titles.”