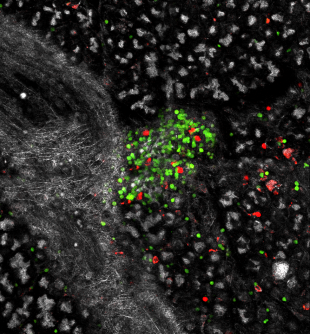 Newswise — LA JOLLA, CA—In Type 1 diabetes the immune system mistakenly attacks and destroys insulin-producing pancreatic cells, leaving patients dependent on lifelong insulin injections. The putative perpetrators of the attack—which are called CD8+ cytotoxic T lymphocytes (CTLs)—recognize specific protein fragments displayed on pancreatic islet cells and then kill them. However, even CTLs that cannot recognize islet-specific antigens (but for example viral antigen) nonetheless invade pancreata as inflammation progresses. These cells have been dubbed bystanders, since researchers didn't know what they did. Many thought they might enhance inflammation.

A new study published in the March 23, 2018, issue of Science Immunology solves this mystery, with a surprising revelation. In it a team led by La Jolla Institute for Allergy and Immunology (LJI) diabetes researcher Matthias von Herrath, M.D., reveals that bystander cell accumulation antagonizes rather than abets cell-killing by specific CTLs, curbing inflammation.

This is noteworthy because that chief anti-inflammatory role has been traditionally ascribed to what are called regulatory T cells, or "Tregs", which dampen autoimmune responses. The new study challenges this notion and suggests alternate mechanisms can also be at work.

"We show that the allegedly 'professional class' of immunosuppressive Tregs is not necessarily the key player in resolving inflammation in this experimental model," says von Herrath, a professor in LJI's Division of Developmental Immunology. "We now find that many cells, among them non-specific CTLs, can do that."

To show this, his team employed mouse models in which one can experimentally induce beta cell destruction. Simultaneously, the researchers transferred various ratios of CTLs into mice—including both the cell-killing variety and the non-specific bystanders. They then used state-of-the-art imaging to count surviving beta cells.

Why bystanders exert an immunosuppressive effect is unclear. One possibility is that their influx limits access to beta cells by the cell-killing CTLs, in effect crowding them out. Another is that bystanders interfere with signals sent to cell-killing CTLs by other cells that assist in ramping up inflammation. Whatever the reason, the result was unexpected.

"Some had thought bystanders passively add to damage done by specific CTLs but we found the opposite," says first author Gustaf Christoffersson, PhD, a former postdoc in the von Herrath lab. "When bystander cells were present in sufficient amounts, they dampened those inflammatory responses."

That idea that Tregs are the dedicated inflammation fighters is so entrenched in the field that the group performed experiments proving that protection conferred by bystanders had nothing to do with expanding Treg populations. "Tregs do have profound anti-inflammatory effects in some disease models," says Christoffersson. "But treatments seeking to expand this cohort of cells have not proven as successful in the clinic as they have been in the lab."

Von Herrath says his colleagues in the field must now recognize that diverse immune cell types, not just Tregs, can potentially rein in the inflammatory response in autoimmune disease. "In the end ‘professional Tregs’ may matter less than we thought," he says.  Von Herrath also relishes how his new paper upends dogma in the field. "Right now people are talking about challenges to science," he says. "But the biggest threat to science comes when we hold onto ideas too closely. Then we might miss the obvious."

In fact, his team is already planning ways to widen the therapeutic focus. "We are currently looking into whether there are ways to safely induce a bystander population of T cells to work in our favor as treatment for type 1 diabetes," says Christoffersson, now a researcher at Uppsala University in Sweden.

The study was funded in part by the La Jolla Institute for Allergy and Immunology, the Swedish Research Council and the National Institutes of Health.