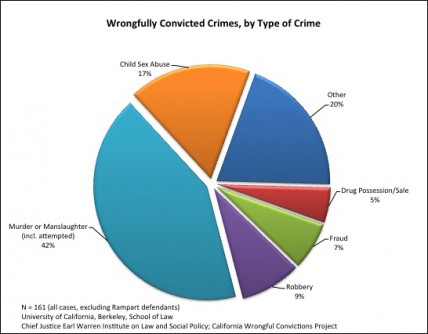 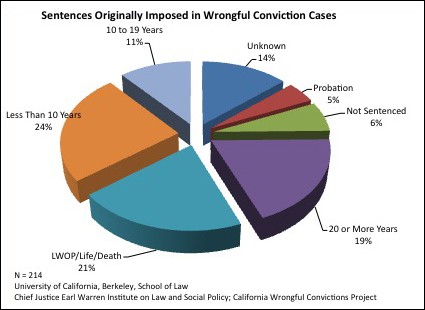 Newswise — A new research group finds that at least 200 wrongful convictions have been thrown out since 1989 in California, costing those convicted more than 1,300 years of freedom and taxpayers $129 million. The California Wrongful Convictions Project, launched by the University of California, Berkeley, School of Law (Berkeley Law) and Hollway Advisory Services, a criminal justice research firm, announced these findings in preliminary data released today.

In addition to the costs to individuals and their families of life lost behind bars, the direct costs of incarceration and compensation calculated so far total $129 million ($144 million when prison costs are adjusted for inflation). This figure does not yet include the costs of legal representation and court proceedings necessary to overturn the convictions, an amount expected to be substantial given the multiple trials and years of appeals routinely undertaken by wrongfully convicted individuals.

A detailed report to be released in 2013 will include the full costs of legal representation, court proceedings, and appeals, as well as costs related to confirmed misconduct by prosecutors, government investigators or police. It will also track the reasons why convictions are overturned.

“The project’s final analysis will include the time, money and resources wasted on all cases that were overturned and dismissed due to misconduct and legal errors, including those where innocent people are wrongfully charged,” said Rebecca Silbert, a project director and senior associate at Berkeley Law’s Chief Justice Earl Warren Institute on Law and Social Policy. “We know that there are errors in the system; what has been missing until now is a precise analysis of the financial impact on California.”

• Since 1989, courts have exonerated or dismissed convictions against 214 Californians. Reasons include official misconduct, insufficient evidence, findings of innocence, ineffective defense, and legal error;

• The vast majority of these wrongfully convicted individuals served time in state or federal prison before their convictions were thrown out, collectively losing 1,313 years of their freedom;

• 40% of individuals in the dataset were initially sentenced to 20 years or more in prison, including many who received life, life without parole, or death sentences before their convictions were overturned;

• Individuals framed in the Los Angeles Rampart police scandal of the late 1990s account for 25% of the wrongful convictions in the dataset (53 people thus far; news reports estimate the total number of exonerated individuals at greater than 100), but only 10% of the 1,313 wasted years in prison were served by those individuals;

“This data shows that both inadvertent mistakes and deliberate misconduct are more common in our criminal justice system than most people think,” said John Hollway, the founder of Hollway Advisory Services. “We are seeing prosecutors and defense attorneys work hand in hand to reduce these errors. A systemic review of the mistakes will allow us to measure the frequency and costs of justice system flaws, especially in this era of prison overcrowding and cost overruns. We want to prioritize reforms to reduce wrongful convictions and their significant cost to taxpayers.”

As researchers actively review court records and reach out to attorneys across the state, they expect the number of cases in the study to increase substantially.

“We owe it to everyone involved, including the victims, to identify problems and work towards a more fair and accountable justice system,” said Andrea Russi, a former federal prosecutor and managing director of Berkeley Law’s Warren Institute. 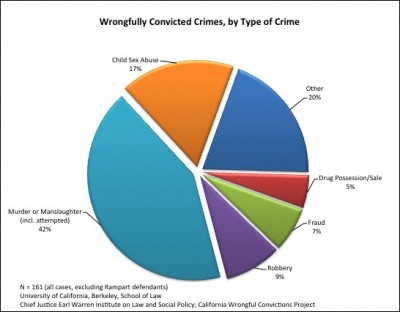 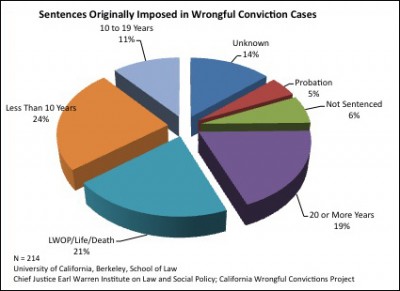