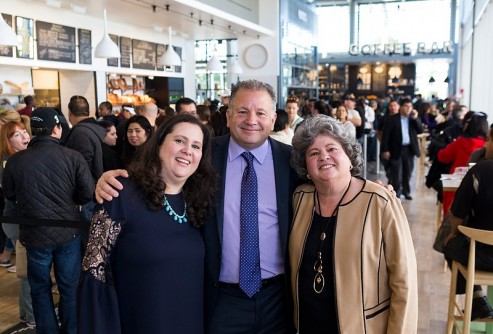 ​​Newswise — As a student at California State University, Los Angeles, Beatriz Porto would rush home from class to help her mother in the kitchen with whatever delicious specialty she was baking that afternoon.

But unlike other daughters, Beatriz was learning to cook and bake from none other than Rosa Porto, the co-founder of the famed Porto's Bakery & Café.

For more than 40 years, the bakery has been a staple in the Los Angeles area. With four locations – a fifth is in the works – and more than 1,000 employees, the business serves about 4.5 million people annually.

Over her lifetime, Beatriz has seen the bakery expand from her mother's kitchen to become a family dynasty that serves up countless cakes, pastries, and, yes, those famous Potato Balls.​

The Porto family – Rosa and her husband, Raul, and their three children Beatriz, Raul and Margarita – immigrated to the United States from Cuba in 1971.

Raul and Rosa had found themselves unemployed in Cuba, so Rosa turned to her favorite pastime – baking – to provide for the family.

When they moved to the U.S., Rosa continued making cakes at home on her own — even turning her children's beds into makeshift pastry decorating counters — until 1976, when the couple opened a little cake shop in Los Angeles.

Rosa attended college in Cuba; she credits higher education with enabling her to turn a hobby into a successful business when her family needed it most.

"[My parents] wanted us to do better than they did and they knew that education was the only way to get ahead in this country."

The path that led all three Porto siblings to Cal State LA was straightforward, says Beatriz: "It was very close to us and we could afford it. It made perfect sense to stay close at home if we were going to go to school and work in the family business. We couldn't afford to go out and live on a campus somewhere because we simply didn't have the means to do that."

Beatriz Porto wanted to become a lawyer, something her parents applauded; they wanted their children to avoid the laborious work they'd experienced.

But when Beatriz set out to find work as an attorney, she soon realized she'd already found her dream career; in fact, she'd been doing it since childhood.

Her siblings felt much the same. "We thought, Why are we looking for jobs elsewhere?' Porto remembers. "The place was doing so well and, without even realizing it, we had fallen in love with the business.

"We agreed to move ahead and take the bakery to the next level." In the 1980s, all three slowly began taking on leadership roles in the bakery.

If the family business was a labor of love, it was college that provided Beatriz, Raul and Margarita with the skill and the confidence to see the potential of Porto's Bakery & Café.

"My brother got to come back to the business and play with everything he had just learned at school, as did I and my sister," she says. "The fact that we are where we are is because of education."

Porto applied her passion for the law, turning it into a community relations role at the bakery; Raul manages the finances and Margarita oversees the bakery.

"We all ended up doing what we loved the most without having to leave," says Beatriz.

What matters most to all, though, is the pride they feel in putting their degrees to use to successfully build upon their parents' hard work, she adds.

"Going to and graduating from college is what made my mom and dad most proud. It made us who we have become: leaders in the family business."​