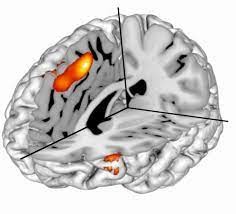 The orange section shown in the fMRI image of the brain is the region in the dorsal anterior cingulate cortex (dACC) researchers identified in their study. Activity in the dACC signals surprising events during motivated behavior.

Newswise — Humans control their behavior in numerous ways, from stopping the urge pick at a scab to resisting the impulse to eat an entire box of chocolates. Suppressing undesired behavior, referred to as “cognitive control,” traditionally has been linked to the functioning of the dorsal anterior cingulate cortex (dACC) in the front of the brain. Activity in dACC is observed across a variety of contexts, yet its function remains intensely debated in the field of cognitive neuroscience.

Theories of the role of dACC in inhibitory control highlight surprise, choice difficulty and value of control as key mechanisms. Although these theories have been successful in explaining dACC involvement in inhibitory control, it remains unclear whether these mechanisms generalize to motivated control. Motivated control processes help people achieve a desired goal even when doing so is difficult or costly.

Results of the study, published in the journal Nature Human Behavior, demonstrate how a singular model unifies conflicting findings on dACC function, takes cognitive control research to new heights, and provides fascinating insights into the role of dACC as a component of a network of brain regions that support motivated behavior.

Researchers discovered that the single mechanism of surprise – defined in the paper as the difference between events that are expected to happen versus those that actually happen – best accounts for activity in dACC during a task requiring motivated control. The series of analyses they performed indisputably supported the PRO model – indicating that recognizing surprising events could provide a unified explanation for dACC function. Surprise signaling is the shared driver of inhibitory and motivated control and supports surprise coding as the core mechanism underlying medial prefrontal cortex function more generally, with the source of the surprise determining the exact neural population implicated.

“During motivated control, we found that dACC activity reflects the calculation of surprise and does not track choice difficulty or value,” said William Alexander, Ph.D., corresponding author and an assistant professor of psychology and a member of the Center for Complex Systems and Brain Sciences in FAU’s Charles E. Schmidt College of Science. “Instead, dACC activity is all about predictions of our choices and environment and especially signals when those predictions are wrong. A key contributor to motivated control, dACC tracks a computational quantity similar to surprise, which is generated when events differ from our expectations.”

For the study, researchers dissociated the need to invigorate a response from reward incentive to  distinguish motivated control from value-driven responding. fMRI data recorded human subjects performing various tasks ranging from easy to difficult. Participants within an fMRI experiment chose between two options each tied to a different amount of money and had to make choices very quickly, within a 750ms timeframe. This time pressure required them to exert cognitive control to balance the competing demands of the task, an assumption that was confirmed through their behavioral results.

Another key finding of the study is that several other regions of the brain in addition to the dACC also generated the patterns of activity predicted by the PRO model. Future studies will need to position dACC within a larger network of brain regions that collectively evaluate the need for increased control of behavior and then implement that control through changes in other systems.