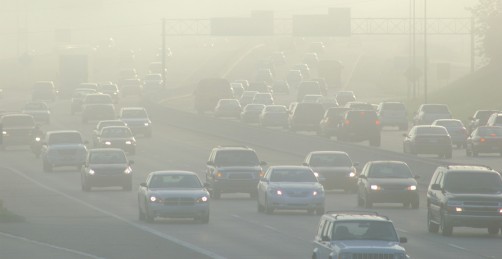 ​The air quality in some California cities was rated the worst in the country by the American Lung Association. Los Angeles has been ranked at the top of the Association's annual "State of the Air" reports for all but one of its 18 reports.

Newswise — ​​​​​​​The quality of the air in California may be improving, but it's still dire.

That's according to the American Lung Association's recent "State of the Air 2017" report, which labeled the state and region a leader in air pollution, with the highest ozone levels.

The annual study ranks the cleanest and most polluted areas in the country by grading counties in the U.S. based on harmful recorded levels of ozone (smog) and particle pollution. The 2017 report used data collected from 2013 to 2015.

The top three regions in the country with the worst smog levels were Los Angeles-Long Beach; Bakersfield; and Fresno-Madera; Salinas, though, was recognized as one of the cleanest cities in the state and the country.

"The Los Angeles basin is exposed to the highest ozone levels in the country," explains Steve LaDochy, Ph.D., professor of geography and urban analysis at California State University, Los Angeles, an expert in air pollution and climate. "It is getting better here, but it's still the worst."

The air quality in the state was significantly better in northern California, found the report. Nonetheless, more than 90 percent of Californians still live in counties with unhealthy air.

The Price of a Growing Population​​

Dr. LaDochy says implementing eco-friendly air regulations are key to lowering pollution levels and that the rise in electric vehicle (EV) use and renewable energy sources have helped to improve air quality.

That said, he stresses that efforts to reduce pollution shouldn't slow because some progress has been made. "There are a lot of people still living in unhealthy areas and there is still a need for improvement," says LaDochy, who has conducted studies of L.A.'s air quality and climate, many with the help of student researchers at Cal State LA.

LaDochy suspects that California's continuously growing population is largely to blame for the state's failing grades on "State of the Air" reports and more residents is also behind the Central Valley's recent drop in air quality, according to the report.

"Population in [the Central Valley] has really bloomed; it's nearly doubled," he says. "The coast is so expensive, so more and more people are moving to central California." The rise and growth of agriculture in the area has also led to a boom in population.

While the state has some of the strictest environmental regulations in the U.S., keeping regulations in full effect is a challenge given the increase in residents, LaDochy adds.

Ozone, a highly reactive gas, is produced when the sun's rays split oxygen molecules. "It is a byproduct of our sunny weather and so many cars on the road," he explains. "So when the ozone levels go up, it is basically because there are a lot of cars and sunlight present."

Ho​​t days are especially bad for smog. "The higher the temperature, the worse the ozone levels," he continues. "So if our city keeps getting hotter, that is going to cause higher levels of ozone."

LaDochy believes that recent proposed federal cuts to environmental programs will have a direct impact on the state's air quality. "One thing we can do is cool down these cities, and Los Angeles is trying to do different things to do that," says the air pollution expert, citing the city's efforts in planting trees and implementing cool roofs.

"We can take a lot out of the ​["State of the Air"] report," he says. "It is telling us that yes, we are improving, but there is still a lot to do. We need to be more sustainable, we need to live less consumptive lives. Everyone needs to do their part, every little bit counts."