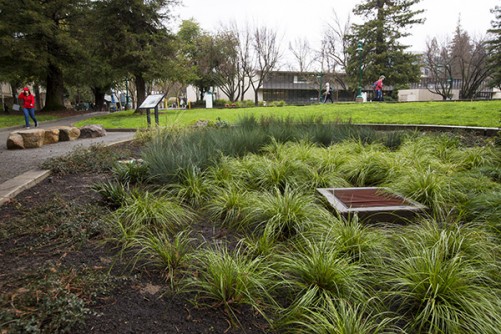 A maturing rain garden and porous pavement in the Library Green are among the many campus stormwater-management devices that ensure clean water runs into the American River.

The 24 LID (low-impact development) devices in seven locations on campus collect and filter 3.6 million gallons of stormwater annually. This helps to greatly reduce the University’s impact on the American River, which runs alongside the campus. The amount of sediment and metal loads flowing into the river is down by 60 percent to 90 percent on average.

“The whole project is about protecting the American River,” says Maureen Kerner, research engineer with Sacramento State’s Office of Water Programs (OWP). “Before this project, stormwater runoff on campus was collected and pumped over the levee into the river, carrying pollutants with it.

In 2014, the state Water Resources Control Board awarded OWP and the City of Sacramento $3.3 million in Proposition 84 clean-water funds to design, build, and monitor the LID project. Construction began in June 2015.

The project has won two awards: The California Stormwater Quality Association (CASQA) last year named it the state’s outstanding stormwater best management practices implementation project. And in 2015, the Sacramento section of the American Society of Civil Engineers recognized it as the region’s best urban development project.

Among the LID team’s outreach efforts are colorful, educational signs posted at the seven locations, as well as on the campus side of the Guy West Bridge across the American River. They also created a self-guided walking tour of the seven locations at owp.csus.edu/lid that is accessible on mobile devices.

And the campus LID website (owp.csus.edu/csus-lid) provides design plans, construction information, monitoring details, and a list of drought-tolerant plants chosen for the project.

“The plants are an important component of LID, so we listed them all in case people visiting want to do something similar on their own property,” Kerner says.

The successful LID project adds to Sacramento State’s reputation as one of the world’s most sustainable campuses.

For instance, the Association for the Advancement of Sustainability in Higher Education (AASHE), a national nonprofit that empowers higher education institutions worldwide to lead the sustainability movement, named Sac State a top performer in its 2016 Sustainable Campus Index. In addition, Sac State was ranked No. 3 overall among master’s institutions (schools that award at least 50 master’s degrees and fewer than 20 doctoral degrees annually).

In addition, AASHE last year awarded Sacramento State a Gold rating, putting it in elite company among the 650 colleges and universities on six continents that voluntarily report to STARS, the association’s sustainability tracking system. Sac State has the highest score in the 23-campus CSU. – Dixie Reid